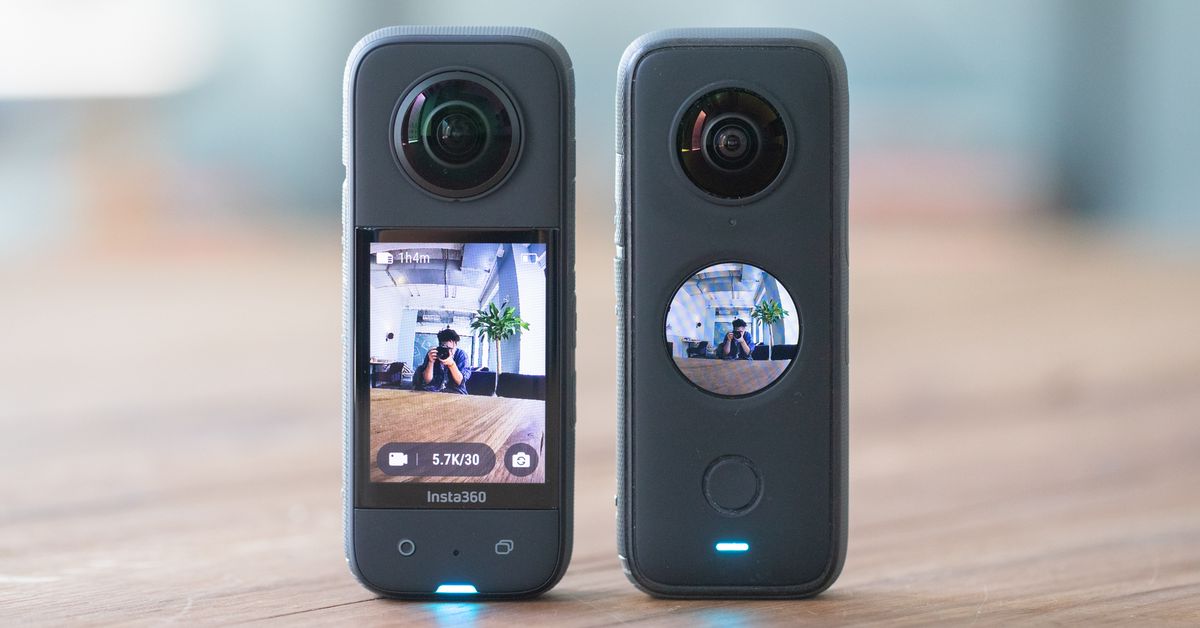 Insta360 has announced the X3, an all-in-one 360 ​​camera that is the successor to the One X2 released in late 2020. Looking at the two cameras side by side, the X3’s biggest upgrade is obvious: the company dropped the slightly confusing “One” from the camera’s name. Oh, and instead of a small circular touchscreen, the X3 now has a 2.29-inch rectangular screen, which you can use to preview and review images and control the device. (Ironically, the X2’s biggest upgrade was also in the display department.)

At $449.99, the X3 is slightly more expensive than its predecessor and still has the same 5.7K maximum resolution that the X2 had. However, the company says the camera’s 1/2-inch sensors have received an upgrade for “better high-resolution and image quality.” The actual lenses also got some tweaks: they’re now f1.9 compared to f2.0 and will capture a wider scene at a 6.7mm focal length, while the X2’s lenses were 7.2mm. The camera also supports Insta360’s active HDR mode which tries to capture as much dynamic range as possible, even in fast-moving shots.

Although the X3 hasn’t improved the resolution of 360 videos, there have been improvements for other modes. When shooting single-lens (essentially action camera mode), the X3 can do 4K; the X2 maxed out at 1440p. The X3 can also shoot super-detailed 360 stills at 72 megapixels, a big step up from the X2’s 18 MP stills. Time lapses and bullet time mode (in which you move the camera in circles to get an effect similar to that of Matrix) have also gotten resolution boosts to 8K and 4K, respectively.

There are also some new features. In addition to the larger screen, the camera has a larger 1,800mAh battery and four buttons for better control if you’re wearing gloves. (Since the X2’s batteries were 1630 mAh, they won’t work in the X3.) There’s also a new shooting mode called “Self mode,” in which the camera creates a 180-degree video with you in the center of the frame as you hide. the selfie stick you’re holding. the edge video whiz Becca Farsace loved trying out the camera; “She is incredibly smart in that most of the videos I shoot are reframed to face myself. And given the rise of 9:16 social videos, this is a very nice feature,” she said.

the filtered pre-record function which will automatically save a few seconds of footage before you hit the record button will not be available at launch, according to company spokeswoman Caroline Zhang, but will be included in a future update. The X3 will have a “loop recording mode” that allows it to act a bit like a dash cam, recording continuously but only saving footage permanently when you tell it to.

Since Insta360’s X cameras have often been used to capture action (the company says the X3 is waterproof to 33 feet), we asked how durable that new screen was. Zhang said that “the X3’s screen is made of tempered glass,” which unfortunately doesn’t tell us much.

Its all-in-one design makes it feel a bit more rugged than the company’s One RS camera, which also features a 5.7K 360 lens but is only waterproof to 16 feet. However the An RS is modular — if you were a quality fanatic, you could add the 1-inch 360 module, which can shoot in 6K and of course has a bigger sensor. You can also extract the 360 ​​module and attach it a 4K action camera lens.

Both cameras are more expensive than the X3 though: the base model that comes with the 5.7K 360 lens and action camera lens is $550, and the Insta360 One RS 1-Inch 360 bundle is $800. Well, I highly recommend taking a look Becca’s One RS Review if you’re considering an X3, if only to listen to your warnings about Insta360’s less-than-stellar replacement policy and protection plans.

Overall, the X3 feels like a solid step up for one of Insta360’s most popular products. It’s probably not a must-buy for anyone who owns an X2, but for those who own an Insta360 One or One X, it could be a nice upgrade. And since the screen is so much larger, it seems like an obvious choice over the X2 for anyone looking to shoot 360°.