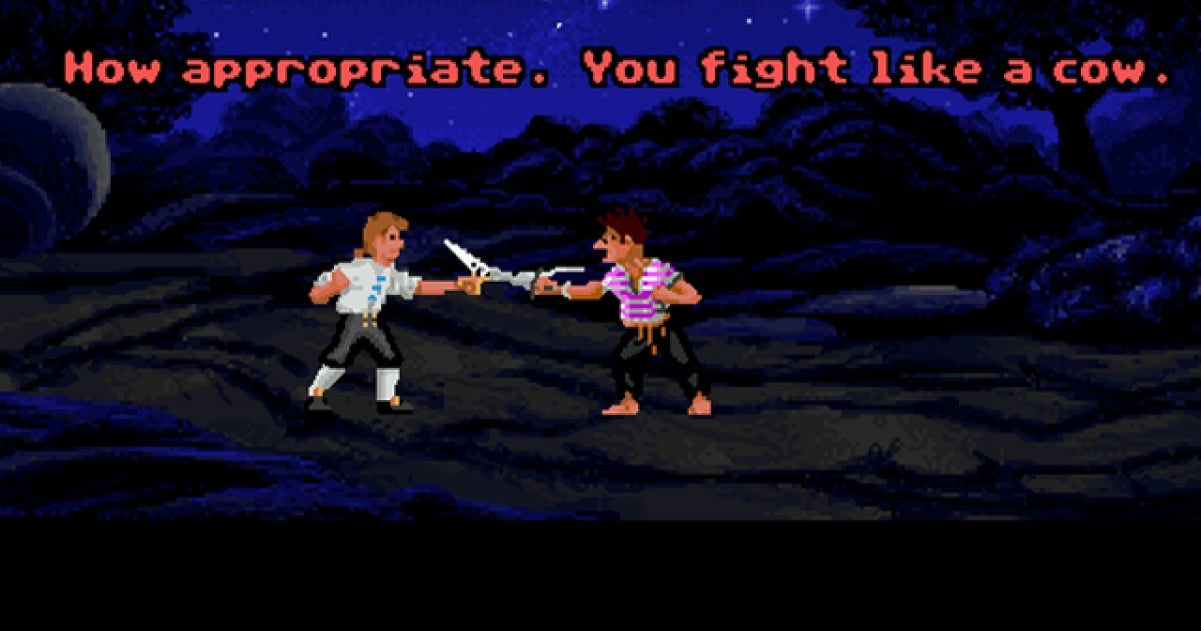 With a new Monkey Island game launching next week, we decided to round up a couple of Guybrush superfans to talk about this magical, evocative, and hilarious series.

Chris Donlan: Years ago when I was in school, a friend of mine had Monkey Island on the family PC. I remember the PC was in the hallway and we used to play for hours and hours into the night. My memories of Melee Island at night are mixed with the night at my friend’s house while we were playing this. I wonder: what are your earliest memories of Monkey Island? When did you realize it was your thing?

Victoria Kennedy: He was also a friend to me, or at least one of my brother’s friends. My earliest memories of Monkey Island are not playing it, but watching other people play it. I can clearly remember being so fascinated by music (something that to this day still gives me a delicious rush of dopamine every time I listen to it), and also by colors. In a nutshell, it really made me happy.

I then moved on to play it for myself, and being quite young at the time, it gave me a great feeling of an epic adventure that I had never experienced before. Being older (and perhaps wiser) now, I think another thing I enjoyed about my little boy was that while he certainly had that sense of adventure, there was never any sense of real ‘threat’. He could wander around the island of Melee at a fairly tame pace without feeling any anxiety that something was about to go terribly wrong. I hope this makes sense! What is it about this series that you think makes it so endearing and enduring?

Chris: I think you nailed it – the colors and atmosphere are a big part of why this game feels so transported. In the early 1990s, it seemed incredible that a game could be so rich and evocative and also so much fun. I remember the times when the game broke the fourth wall, and it was always a real shock: games could do this? Could you make jokes about being games?

But perhaps more than anything it is that sense of place. There’s something really magical to me about being on Melee Island at night – it’s one of the best places in all of video games. I was always a little disappointed that you visited Monkey Island during the day. Do you have a favorite place?

Victory: I also loved, and still love, the way the game breaks the fourth wall! Hmm, as far as locations, there are some great ones to choose from. From the very first game, the Scumm Bar immediately comes to mind! Seeing such playful debauchery (perhaps a strong word, but at the time that’s how I remember it) with the pirate hanging from an anchor/chandelier with a grog in hand. That was amazing to me.

In later games, Booty Island stands out; maybe this is because this is where I saw Elaine Marley again. When she was younger, and a lot of my friends wanted to be pop stars or something, I idolized Elaine, along with Sophia from Indiana Jones: Fate of Atlantis and April O’Neil from TMNT. I also loved the area at the beginning of LeChuck’s Revenge, where the city is essentially a bunch of ships. Do you have a particular puzzle that you still remember, for better or worse?

Chris: It is the structure of the puzzles that I remember more than the puzzles themselves. I really, really love Three Trials, because it’s almost an open world thing. It’s a series of challenges that send you through Melee Island and the entire island provides the solution. I also love the way he always subverts your expectations – easy solutions are never right. I also loved gathering the ingredients to get to Monkey Island. And you?

Victory: Insult to sword fighting! “I am rubber, you are glue!” This was comedy gold and, mirroring my earlier comment, I loved being able to ‘fight’ without my actions having a dire consequence.

I also completely agree with your comment about how puzzles often subvert your expectations. I only played the third installment, Curse of Monkey Island, more recently, but there was a puzzle where you ‘duel’ a banjo to get a pirate to join Guybrush’s crew. I love that logic! Are there any puzzles or locations that you hope we get a chance to revisit in Return to Monkey Island?

Chris: I’m playing it now, so I can’t answer that! One thing I will mention is that I thought Curse dealt very well with the nostalgia angle: the desire to relive the experience of the original. If I remember correctly, the entire final act takes place in a theme park based on the first two games, so check out these dioramas from the story above. Did that seem like such a clever Monkey Island way of talking about nostalgia? I love that game, although I know Ron Gilbert really likes it. Did you really like the sequels?

Victory: Damn, yes a lot. The last two, not so much to be honest. The big worn-out hunk inside (can I add spoilers here?) the manatee in Tales also felt…OMG, I can’t really think of a word for this. But I didn’t particularly enjoy that part. I did like Morgan LeFlay’s introduction though. What do you think about them?

Chris: I played 4 and quite liked it, but I don’t remember the Telltale ones. I think LeChuck’s Revenge really holds up, like the weird and creepy middle act? When you spoke to the developers of Return recently, it seemed like this might not be the last. Would you be happy to see the series continue forever?

Victory: As with anything, if there’s a good concept that can be executed well, then yes, keep doing it. Yet as much as I love, love this series, I would hate to see it become obsolete and stay as welcome.

When I spoke to the devs, they mentioned that they had discussed a game with Elaine at the helm and Guybrush as a partner. I think this could be a lot of fun if done with the right team behind it. As I’ve already mentioned, I love Elaine.

Ok Donlan, aside from the lack of late night visits, which do you think is the better island, Melee or Monkey?

Chris: Definitely melee. It felt like it gave you an amazing amount of freedom to explore, and it’s just plain pirate at its best. It’s like a little theme park. It’s probably my favorite video game island, up there with the Wind-Waker and The Silent Cartographer stuff. And you?

Victory: I totally agree with you, I love how you describe it as a little theme park. That is precisely it!

I also posed this question to the developers of Return to Monkey Island earlier this week. Dave Grossman and Return art director Rex Crowle also said Melee, but for two different reasons.

For Grossman, Melee was easier to write for, thanks to the fact that it was more densely populated than Monkey Island. In his words:

“I think the best island from a writing and storytelling perspective is Melee, because it’s full of people. I learned this in The Secret of Monkey Island when we were all working on Melee Island and having fun making jokes and stuff. And then the time came, we had to start working on the Monkey Island parts. I was shuffled around doing that for a while, [and] I was like, ‘Wait, this is hard, because there are all the environments, and I need to make them rich and fun to explore. And then there are no people in them.’

“[So], you’ll notice that there are notes that are left everywhere on Monkey Island in that first game, and those are there, because you needed someone to talk to someone for things to happen. And he just nailed them. So from that perspective, and from that perspective alone, I think Melee Island is better.”

I love the thought process behind those notes, this was something that never crossed my mind before talking to the Monkey Island team. I’m going to look at Monkey Island differently now, and smile at the thought of Grossman trying to flesh out the world for his players without losing any of the fantasy of the game.

Meanwhile, Crowle loves the “dark and mysterious atmosphere” of Melee. “[What] I’m lovin ‘it, [is] you just don’t know if, as you’re walking down an alley, someone is going to jump out and grab you and take you back there,” he told me.

My favorite response to this one, though, came from Gilbert, who, in a completely deadpan manner, told me that he likes the idea of ​​Monkey Island for a vacation, following Grossman’s statement about the lack of people meeting. find there.