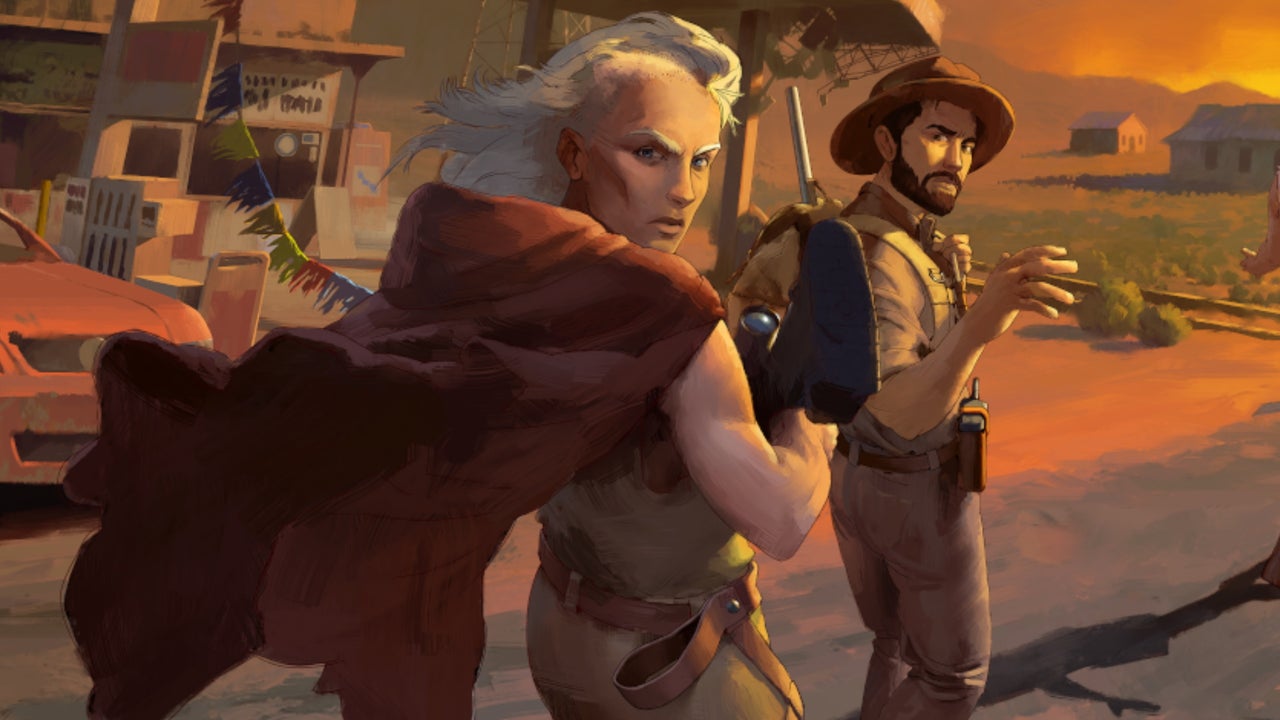 Your journey in Broken Roads, an isometric RPG set in the post-apocalyptic wastelands of Western Australia, begins with a trial. Similar to Voight-Kampff from Blade Runner, it poses a series of hypothetical situations and asks how you would respond. What would you do if you found out that a man about to be executed is probably innocent? How would you deal with scavengers looting a place you found first? How would you treat a captured bandit who raided your home? Each of your responses is mapped out into a literal moral compass, a persistent and permanent mechanic that will shape your character’s worldview for the next 25 hours.

That compass is divided into four segments: Humanist, Utilitarian, Nihilist, and Machiavellian, and where you are on that spectrum dictates what dialogue and actions your protagonist can take. A humanist character, for example, won’t be able to say the most egregious responses simply because he would never consider saying them. But experiences shape us, and your character’s worldview can gradually change over time. A utilitarian might slowly find his heart and become a humanist, or slide down a manipulative slope and end up a Machiavellian. Sometimes his world view is expanded to encompass multiple perspectives, opening up more options for dialogue. Other times it will narrow down, blocking options but also granting you special abilities that compensate for your dedication to a specific worldview.

The Broken Roads moral compass represents your philosophical bent. The white dot traces your current view of the world, while the yellow cone highlights your broader range of potential thinking.

That’s the promise of Australian developer Drop Bear Bytes, at least. When I first played Broken Roads’ 30-minute demo at Gamescom earlier this year, which contains just two short missions, there wasn’t enough time to watch the compass change with each new decision. Naturally, I won’t be able to see the impact of my growing decisions until Broken Roads arrives in full. But since then I’ve played the demo three more times, using protagonists built around very different worldviews, and have watched in fascination as those two demo missions change and morph appropriately.

It all begins on a dusty street, where a woman lies sobbing over the body of her dead husband. On the side of the road, her son, Will, holds a smoking gun. This simple scenery branches out like a tree in full bloom. Will you talk to Will, carefully convincing him to drop the gun? How about we catch him off guard and snatch the gun out of his hands? Or will you shoot him, ending the situation in a single flash? For my humanist construction, that last option is completely impossible. The most violent option I have, available only after progressing through numerous branches of the dialogue tree, is to shoot Will in the leg. My character with murkier morals, on the other hand, can blow up the kid early on. But such an action requires a justification that further defines his philosophy. The Machiavellian option considers the child “too much of a threat”, while the nihilistic option is much more somber “this family is doomed anyway”. Both require the same physical trigger pull, but are clearly separate options.

Technically, Tragedy Road plays out much like any sound CRPG I’ve played, but it reminds me a lot more of the moral choice scenarios in games like Telltale’s The Walking Dead. It feels incredibly pressured, with each new dialogue option demanding care and composure, especially if your goal is to save Will from his own weapon. Despite knowing this guy for a few minutes, the sense of relief when he puts down the gun is enormous.

Whatever choice you make is instantly reflected back to you through your group members. She, an inveterate sniper, approves of you putting Will out of his misery, while Dreamer, a more hopeful crewman, will be furious if you shoot him and elated if you save him. Drop Bear Bytes promises that companions will learn to love him or hate him, and may even be manipulated into sharing their own world view over time. Other decisions will also bless you or haunt you many hours later; the child will return if he survives, for example.

Broken Roads has the potential to be the next game in the Planescape: Torment lineage of deeply introspective, talking RPGs.

Later, in the small town of Kokeby Waystation, the community leader, Tina, assigns you the second mission of the demo. She recently hired a mercenary, Ian, to protect Kokeby, but he has become a problem and she refuses to leave town. As with the previous situation, there are numerous methods to complete this quest. She can simply pay him, an option open to all regardless of her moral standing, or convince him to leave her position through utilitarian reasoning if her character can do so. However, if she opts for aggression, things will be more complicated than in the previous encounter, in more ways than one.

Ian, like any good mercenary, has a gun, so any attempt to kill him will return the favor. That triggers Broken Roads’ turn-based combat, which, at least as far as the demo shows, is the project’s weakest element. The interface is currently clunky, and the lack of options beyond ‘move’ and ‘shoot’ makes it seem tactically thin. It also feels at odds with the scenario above, in which using a weapon is a deliberate and dramatic choice rather than just a trigger for video game combat. He echoes how Disco Elysium got the violence right; the very rare occasions when he was able to throw a punch or fire a pistol in Ravachol felt like a colossally important choice, rather than a rote fact of life.

The demo’s menus reveal that characters will eventually unlock other combat abilities, and hopefully continued development will make turn-based encounters feel more engaging. But I expect combat to be an oddity rather than a standardized practice. Killing someone in a game like this should be a choice, not a mechanic.

Despite my reservations with combat, I leave Kokeby Waystation with nothing but anticipation. Already packed with deliberate writing and layers of dialogue, Broken Roads has the potential to be the next game in the Planescape: Torment lineage of deeply introspective, talking RPGs. That is no coincidence; The creative lead for Broken Roads is Colin McComb, who helped create Planescape and its successor, Torment: Tides of Numenera. He promises that, like all projects that appeal to him, the story will get weirder and weirder as it progresses, though it will stick to the scientifically precise realms of astrophysics rather than anything outlandishly fantastical. He’ll also explore deeply detailed locations, only this time they’re based on Western Australian and Aboriginal cultures (the latter of which have been researched and created with the help of indigenous consultants) rather than the Dungeons and Dragons multiverse.

But McComb also wants to point out that Broken Roads isn’t just his creation; he points to game director Craig Ritchie and narrative director Leanne Taylor-Giles as the project’s guiding lights. As McComb’s previous collaborator on Numenera, I hope that Taylor-Giles brings a fresh take on the Torment writing values ​​that Broken Roads is so clearly based on. That was the secret sauce behind Disco Elysium, and now developer ZA/UM has secured a place in the RPG pantheon (for now, at least). If Broken Roads lives up to the promise of its demo, Drop Bear Bytes could follow.