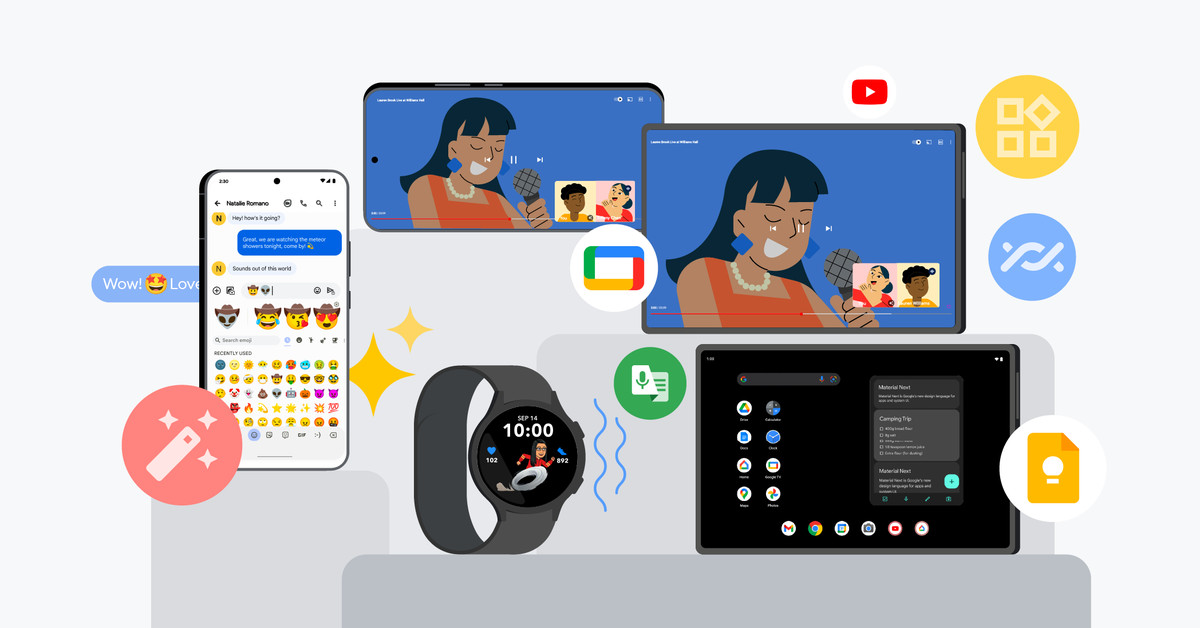 Android is introducing a set of new features to improve accessibility, personalization, and productivity across multiple devices. One of the biggest announcements is that Near Share, Google’s AirDrop competitor, is getting a much-needed update that lets users easily send files between their own devices.

After you opt in to use the new feature on your Android phone or tablet, all transfers between these devices will be accepted automatically, even if your screen is off.

This sharing feature has been scheduled for a few months, and while we’re pleased to see file transfers become easier, it’s still disappointing (though not at all surprising) that the feature is limited to Android-to-Android interactions. No official release date has been announced to share, but Google says the feature will be coming to devices in “the next few weeks.” (It is unclear when exactly the other features mentioned in this update will be available.)

The new updates will also improve accessibility across various Google services. Google Drive and Keep are getting redesigned widgets for devices with larger screens that will give Android tablet users one-touch access to Docs, Slides, and Sheets files within the Google Drive widget, while the Keep widget will increase in size and font size, improving note-taking for people with low vision.

There’s also an update for Android’s sound notifications, a little-known feature that can be found in your device’s Accessibility settings.

These sound notifications were originally intended to help the hearing impaired. Turn them on and your Android device will hear sounds like fire alarms and knocks on your front door, creating a notification when you hear them. Now users can create custom alerts by recording specific noises. So, for example, you can record the jingle that plays on your washing machine after finishing a cycle, and then every time your Android phone, watch, or tablet hears that sound, it will send you a notification.

For those using Google TV, the service now also has a curated content library with audio descriptions that you can find by searching the service manually or using the voice-controlled Google Assistant (it’s unclear when exactly this feature launched).

Google Meet users will also have access to multiple pins during calls, allowing you to keep your attention on several specific people within larger group meetings, such as the keynote speaker and an ASL interpreter.

Google Meet also features shared live experiences such as gaming and co-viewing on Android mobile and tablet devices. This feature can be used to play classics like Uno, Kahoot! Y Warning!as well as watch YouTube content with up to 100 people at once.

Text messaging on Android devices is also getting an update to “smart emoji suggestions” in Gboard, and Android will increase the emoji available for this feature by rolling out new seasonal emoji combinations for Emoji Kitchen that will be available as stickers.

Finally, if you have a smartwatch running Wear OS, then you’ll be introduced to some extra features and fun too. A Keep tile can now be added to your watch for taking notes on the go, and your Bitmoji can be added to your watch face. This cartoon avatar will change its expression depending on what you’re doing, the time of day, and even the weather. So if you’re out for a run and get caught in the rain, your watch will look just as miserable as you feel.