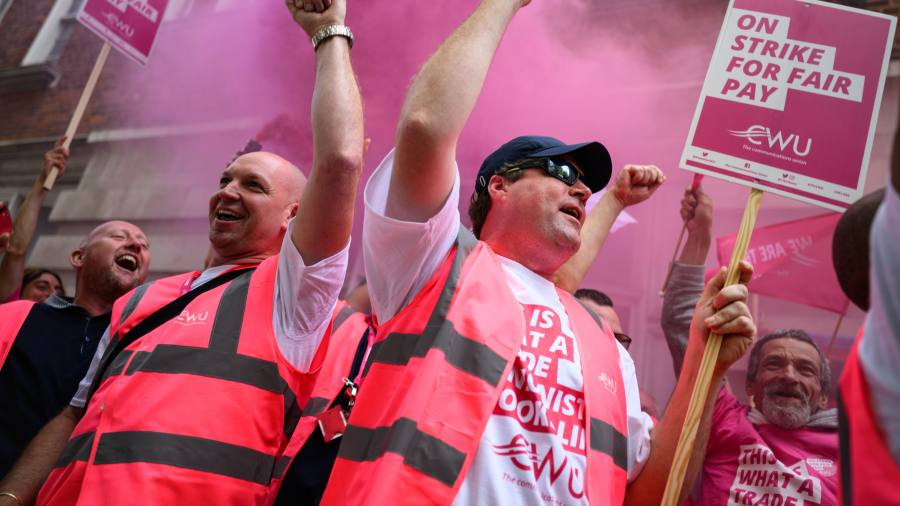 This is not the 1970s, or so respectable economists confidently assure us. Of course, as we face skyrocketing levels of inflation, there are nuanced differences between then and now.

But the UK’s rail, post and rubbish strikes point to an overwhelming similarity, namely that stagflation creates winners and losers. When real national income is reduced by oil price shocks, as in the 1970s or the current food and energy price shocks, rival claimants in the economy compete fiercely to recoup lost income. . A wage price spiral is produced.

Milton Friedman remarked that inflation is “always and everywhere a monetary phenomenon.” Clearly, money is an important component in the inflationary process. However, strikes in the UK and tight labor markets across the developed world suggest that no explanation of inflation can be complete without reference to the struggle for distributive power between labor and capital.

While central bankers congratulated themselves on offering a stable low inflation During the so-called Great Moderation in the three decades leading up to the 2007-09 financial crisis, disinflation was actually the result of the global labor market shock that came from bringing China, India, and Eastern Europe into the global economy.

This ensured a long-term downward trend in the labor share of national income. Productivity gains were seized in their entirety by capital. The disinflationary impetus was reinforced by demographics and the broader ramifications of globalization.

Weak labor returns have delayed consumption and production because workers have a higher propensity to consume than owners of capital who have higher saving rates. This prompted endemically expansionary monetary policies.

As economists at the Bank for International Settlements have long pointed out, central banks did not lean into booms, but aggressively and persistently relaxed during busts. This loose policy bias was further entrenched after the financial crisis by central bank asset purchase programs.

William White, former head of the monetary and economic department of the BIS, argues that central banks have it systematically ignored supply-side shocks and in the Covid-19 pandemic it failed to grasp how much supply potential had been reduced due to illness and lockdowns.

In effect, they have repeated the mistake of Federal Reserve Chairman Arthur Burns, who in the 1970s argued that the oil price shock was merely transitory while ignoring the second-round shock, especially in the labor market.

In his speech at the annual central bankers’ spree in Jackson Hole last month, Fed Chairman Jay Powell indicated that the Fed had taken the case too late, saying the labor costs of curbing inflation would likely rise. with the delay, adding that “we should keep doing it until the job is done.” The difficulty here is that both private and public sector debt are at higher levels than before the financial crisis, so the production and employment costs of sharply rising interest rates will be very high.

This debt trap sharply raises the long-standing question of central bank policy: how to persuade politicians and the public that a modest recession now is a price worth paying to avoid a much worse recession. later. At risk is the independence of the central bank.

The Fed’s tougher line suggests the bond bear market has a long way to go. And the summer rally in stocks appears to have been quixotic. Steven Blitz from T.S. Lombardo points out that it is stocks that Fed policy should have an impact on rather than credit creation because the 2010-19 and post-coronavirus expansions equate to an asset cycle, not a credit cycle. Highly priced financial assets, he adds, have been the source of economic distortions in this cycle.

Correcting those distortions will mean some stark contrasts to the 1970s. Today, shrinking workforces and deglobalization are tilting the balance of power from capital toward labor. We have gone from the Great Moderation through the Great Financial Crisis to a Great Reversal into a higher inflation environment.

It is also a world in which the toxic combination of the debt trap and shrinking central bank balance sheets will greatly increase the risk of financial crises. While commercial bank balance sheets are in better shape than in 2008, opaque and loosely regulated non-banks are a potential systemic threat, as last year’s collapse of the Archegos family office indicated. A vital lesson from history is that after an “everything bubble”, the leverage, or indebtedness, turns out to be much higher than everyone assumed at the time.