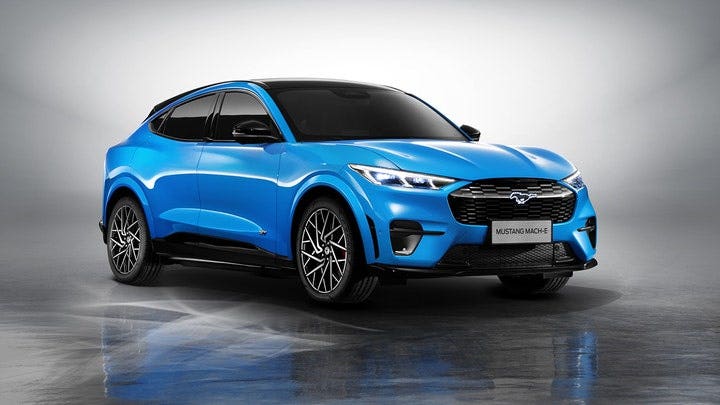 More Americans are choosing to buy luxury vehicles than ever before, a shift fueled by cash-rich shoppers who were able to save in the bank during the pandemic and growing wealth among buyers in the highest income brackets.

The share of new vehicles sold by luxury brands such as BMW, Mercedes-Benz and Tesla has grown steadily in recent years, reaching a record 17.3% of the overall US car market in June, according to JD Power. , a data analytics firm focused on the auto industry. That percentage is up from 14.1% in 2019 and continues a rise that began years earlier, industry data shows.

Sales of super-premium luxury cars — those sold by brands like Lamborghini, Bentley and Ferrari — are still small, but they rose to 6,700 vehicles sold through July this year, a 35.6% increase compared to the same period ago. five years, data from JD Power shows. .

“Wealth is growing and therefore the luxury market is also growing,” said Alain Favey, a member of the sales and marketing board at Bentley Motors Ltd., a unit of Volkswagen AG.

In recent years, the expanding pool of wealthy individuals is providing a larger customer base for brands like Bentley, Favey said. And many of these affluent buyers in the US are younger, she said, and have amassed wealth in the technology and entertainment industries.

The luxury car market got an extra boost during the pandemic with the stock market rally and rising home prices boosting the spending power of many American households, analysts and executives say.

Premium vehicle sales have reached record levels in recent years. In 2021, they reached 2.48 million, 13.2% more than the previous year and above the 1.7% increase registered by mass-market manufacturers, according to Kelley Blue Book, a research firm specializing in prices. and vehicle valuation.

“Records could have been higher if they weren’t limited by supply,” said Tyson Jominy, an analyst at JD Power, referring to manufacturers.

The luxury tilt in the auto business is another example of a broader divide that has emerged in the US economy, with those with means continuing to splurge while less affluent buyers have pulled out. .

Car dealer Jack Hanania said demand for high-priced cars has been so strong that he decided to open a used car business focused exclusively on $100,000-plus models in the summer of 2020. It turned out to be a timely gamble.

“I knew there was some demand,” said Hanania, who has car dealerships in Florida and Pittsburgh. “But I didn’t know we had so many buyers from all over who would come and buy these cars.”

There is no single definition of what a luxury vehicle is, analysts say. The category generally includes established brands with the intention of targeting more affluent customers and offering a high-end experience, both in the types of models they sell and at the dealership. These vehicles often sell for higher prices than their mass-market counterparts, though the line has begun to blur more in recent years on some specific vehicle types.

Superpremium refers to models that represent a significant increase in price from the more general luxury category.

In the auto industry, new vehicle prices have soared in recent years as manufacturers grapple with supply chain disruptions and inventory shortages on dealer lots.

As mainstream models, such as those made by Ford, Toyota and Hyundai, have become more expensive and harder to find, many buyers have opted to go higher-end, where the selection has generally been better, dealers say.

In some categories, the price difference between luxury and non-luxury models has narrowed considerably.

For example, the difference in average transaction prices for a Kia Telluride SUV and a similar-sized luxury SUV, the Lexus RX 350, was $6,875 in July, according to data from car-buying website Edmunds. Before the pandemic, the price difference between the two models was about $9,000, company data shows.

Higher trade-in values ​​in the used-car market are also helping buyers cross over into luxury territory, said Phil Maguire, owner of the Maguire Family of Dealerships, a chain store in New York state. “The thought process was to maybe spend a little more and go with the luxury premium that they really like,” he said.

Mercedes-Benz Group AG is reshaping its global lineup to focus more on vehicles that typically sell for $100,000 or more, including the G-Class SUV and its Mercedes-Maybach models.

On Monday, Volkswagen said it would list its high-end sports car maker Porsche AG in one of the largest initial public offerings in years, valuing it at between €60 billion and €85 billion, equivalent to between $59, 8 billion and $84.6 billion. Porsche has routinely generated double-digit profit margins for VW and outsized profit contributions to the bottom line of its largest parent.

Meanwhile, Tesla Inc.’s sales have soared in recent years, contributing to overall share growth in the luxury segment. With many models priced around $50,000 and up, Tesla’s US market share reached 3.8% through June, more than double what it was in the same period a year ago, according to Kelley Blue Book.

Tom McParland, a New Jersey-based car buying consultant who helps buyers locate and purchase vehicles, said he’s seeing many more luxury buyers interested in electric vehicles, including those made by well-established brands like BMW. . He said more customers are also paying for cars with cash or making hefty down payments.

Amid a broader inventory crisis, luxury brands kept their batches better stocked as car companies tried to use their limited supplies of computer chips for higher-end models, dealers and analysts say.

Still, Bayerische Motoren Werke AG said in August that it expects business to take a hit in the coming months due to inflation, interest rate increases and supply chain challenges.

Dimitris Psillakis, CEO of Mercedes-Benz USA, said he still sees a lot of growth ahead because with cars and trucks in short supply, pent-up demand should send buyers flocking to showrooms.