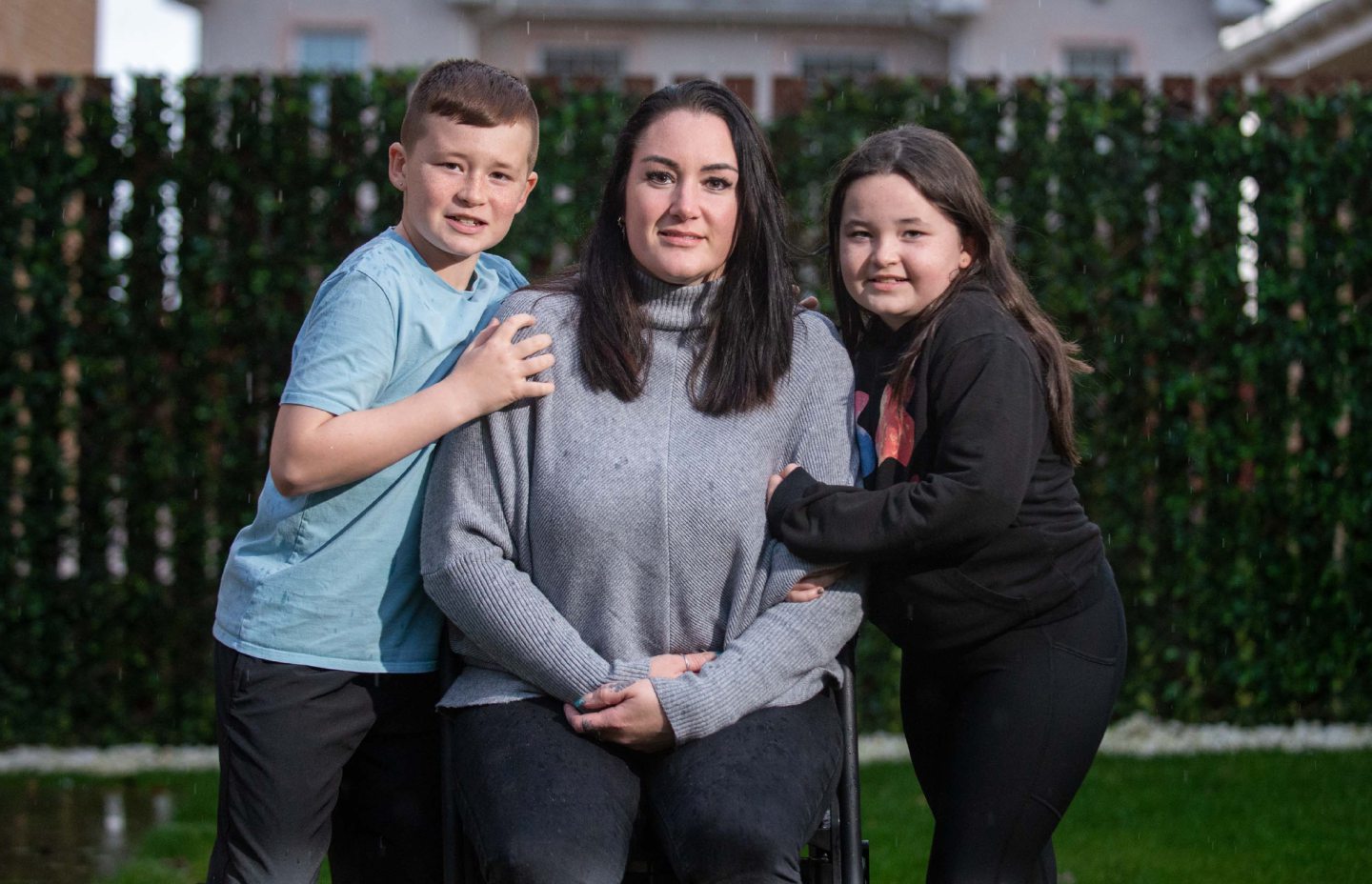 A mother has to “beg” strangers to help her pay for a potentially life-changing treatment in Mexico so she can continue to care for her two young children, even though Scotland’s NHS approved its use three years ago.

Since then, she has gone from being a busy working mom, spending several nights a week at the gym and enjoying 17-mile bike rides, to relying on her children, Kaiden, 10, and Jiah, seven, to help take care of her.

The type of multiple sclerosis she has is so aggressive that the 38-year-old beautician now struggles with daily tasks, is in constant pain and relies on a walker to get around.

Their only hope of stopping the progression is groundbreaking stem cell therapy, which Holyrood approved for use in 2019. It was agreed that the Scottish NHS would fund treatment for patients in England, where it has been available free of charge for several years. . .

But despite having a 75% chance of responding well to treatment, you’ve been told you don’t meet the criteria. Only certain patients with the relapsing-remitting form of the disease are eligible.

‘They have made it impossible’

Miss Taylor, from Culloden, near Inverness, said: “It’s not right. They have made it impossible for anyone to meet the criteria because MS affects everyone differently and it’s so unpredictable.

“In Mexico they have been offering this for 10 years and it is available to anyone regardless of whether they have primary progressive, secondary or relapsing MS.

“Yes, this costs a lot of money, but isn’t it worth it for me to have a life with my children?”

His current treatment drug Ocrevus, which he feels has no effect, costs the NHS £19,000 a year, with infusions needed every six months, and carries a risk of cancer and brain disease.

“It’s crazy,” Miss Taylor, who has launched the Highland MS Warriors Facebook Group, said. “Having HSCT [stem cell therapy] could stop my MS for up to 10 years. Isn’t that going to save the NHS money?

“I have a 75% chance of getting it right, but I know there are some DMTs (disease-modifying therapies) offered (on the NHS) that have as little as a 35-40% benefit.”

She is scheduled for the hematopoietic stem cell transplant (HSCT) at the Ruiz Clinic in the city of Puebla, Mexico, on April 3.

Provided he can raise the money, his immune system will be wiped out with four rounds of intense chemotherapy, before being “rebooted” using stem cells taken from his own blood. Afterwards, she will spend eight weeks in isolation.

He has already set aside his savings and in July launched a GoFundMe page to raise the required £56,000 to cover the cost of the procedure, medication, scans, and aftercare.

Up to this point over £15,000 has been raised. His son was also in action at the weekend, taking part in the Highland Bridge Swing at Garry Bridge, near Pitlochry.

‘I have to take this into my own hands’

Miss Taylor said: “I’m having to beg people for money and I feel bad because they don’t even have it themselves. I am finding it very difficult. But this is what I have to do, I have to take it into my own hands.

“When I got my diagnosis, I felt like the NHS basically told me ‘you have MS’ and left me alone.

“Now I hardly walk, I have to climb the stairs of the house on all fours and my children are basically my caregivers. When they go to their dad’s house, I’m lost without them. I need to prove this so I can have a life for myself and my children.

“I don’t expect to regain full mobility, but it has the potential to give me part of my life back; not be in constant pain or be so tired all the time.”

Despite her rapid decline, she has also been denied the daily living component of her Personal Independence Payment, leaving her with no one to help her with daily tasks.

She said: “The Scottish government needs to come to grips with what is going on.

“I have paid my taxes and national insurance. Even after having my kids I went back to work after a couple of weeks. It’s so wrong.

In Scotland, every week at least 13 people are believed to be diagnosed with some form of MS, with a higher incidence than in any other country.

A Scottish Government spokesman said: “HSCT may be considered for patients with highly active relapsing-remitting MS who have not responded to licensed treatment, as recommended by the Scottish Health Technology Group.

“The experience of using HSCT to treat MS in Scotland is still developing. Although delayed by the need to focus resources on Covid-19, the NHS National Services Division and clinical neurology and stem cell transplant teams in Scotland are working together to plan the development of an HSCT pathway for patients with Eligible MS in Scotland”.