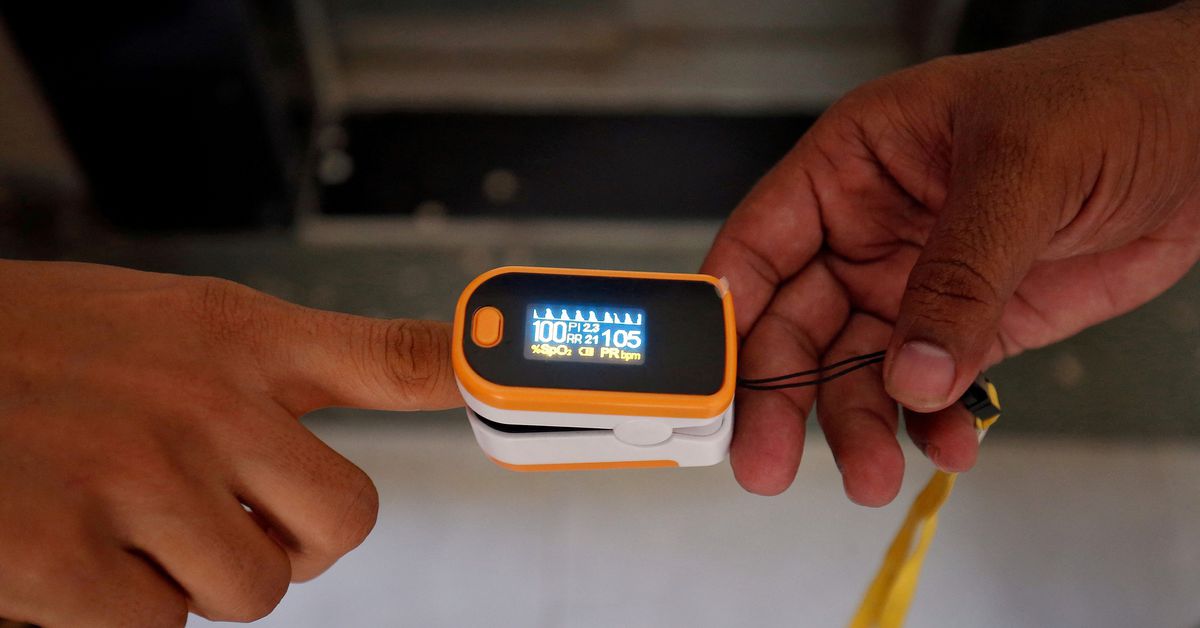 Nov 2 (Reuters) – Medical device makers and scientists are working on new technologies to improve widely used devices that screen for possible heart and breathing problems given growing evidence that current ones could lead to inadequate medical care for patients. with darker skin.

Doctors have long known that pulse oximeters are less accurate in estimating blood oxygen levels in non-white patients, but the discrepancies were considered negligible. The COVID-19 pandemic exposed some of the real dangers of these flaws, as the devices gave falsely high oxygen readings in dark-skinned patients.

As a result, some patients faced delays in COVID treatment or were denied treatment, and some were discharged from emergency rooms rather than receiving care, the researchers found, adding to the litany of disparities in health care experienced by non-white populations.

Expert advisers from the US Food and Drug Administration met virtually Tuesday to discuss improvements to standards for pulse oximeters.

The devices, which are attached to a fingertip, pass red and infrared light through the skin and measure how much light is absorbed by the oxygen-carrying hemoglobin. However, the melanin pigment in darker skin also absorbs light, and current devices don’t adjust for that effect.

To address the problem, some researchers are testing devices that use other wavelengths of light that are not absorbed by melanin.

Among the most advanced in development is a sensor from Rockley Photonics Holdings that uses spectrophotometers and laser instruments on chips to emit a broad spectrum of light, which the company says more accurately monitors not only blood oxygen but also hydration, blood pressure and other biomarkers.

Rockley Chief Executive Andrew Rickman told Reuters his company plans to start shipping the product next month to companies that will package it in wearable and other devices. Clients include Medtronic Plc (MDT.N), a major manufacturer of oximeters, which announced a partnership with Rockley in March. It’s unclear when the new devices will be available.

At Brown University, researchers Kimani Toussaint and Rutendo Jakachira are experimenting with light at wavelengths insensitive to melanin.

Valencia Koomson of Tufts University is developing a device that takes into account a patient’s skin tone and the presence of melanin to better adjust oxygen level estimates.

Everyone agrees that more accurate pulse oximeters are long overdue.

In recent years, studies have shown that low oxygen levels are more often missed in black adults and infants, and that black patients receive less supplemental oxygen than white patients with similar illnesses due to pulse oximeter inaccuracies .

COVID amplified those risks. The coronavirus can cause dangerously low oxygen levels even before a patient feels breathless or appears distressed, making healthcare providers even more reliant on accurate oximeter readings.

Problems with pulse oximetry “suddenly became huge” during the pandemic, said Dr. Philip Bickler, director of the Center for Pulse Oximeter Testing and Hypoxia Research at the University of California, San Francisco (UCSF).

Bickler, whose lab analyzes the accuracy of pulse oximeters for manufacturers, said he believes industry leaders “are working to address device shortcomings.”

Experts say the FDA needs to strengthen its criteria for approving new devices. Current rules require pulse oximeters to be tested on a minimum of just 10 subjects, only two of whom must have “dark pigmentation.”

When there are more than 10 subjects involved, only 15% must be non-white, although some manufacturers test on larger, more racially balanced groups. The agency does not require a standardized assessment to classify skin pigmentation, tools that would be critical to assess inaccuracies.

FDA staff speaking at Tuesday’s meeting acknowledged that while variables in sick patients affect accuracy, pulse oximeters are tested under “ideal” laboratory conditions on healthy individuals. Pediatric devices are tested on small adults rather than children or infants.

Before the meeting, some pulse oximeter manufacturers seemed open to discussing improvements while keeping their devices working well.

Medtronic told Reuters that it “looks forward to sharing perspectives and recommending ways in which we can collaborate with other members of industry, standards organizations, clinicians, researchers and academics to continue to strengthen these technologies.”

Medical technology company Masimo Corp (MASI.O) he said his team does not have “a problem of bias between black and white subjects.” Still, the company told Reuters, “we will continue to improve our pulse oximeters.”

For now, Tufts’ Koomson said, devices that are less accurate on darker skin and sicker people will remain in widespread use.

While the devices remain useful, UCSF’s Bickler said, clinicians “should not base patient care on pulse oximeter findings alone.”