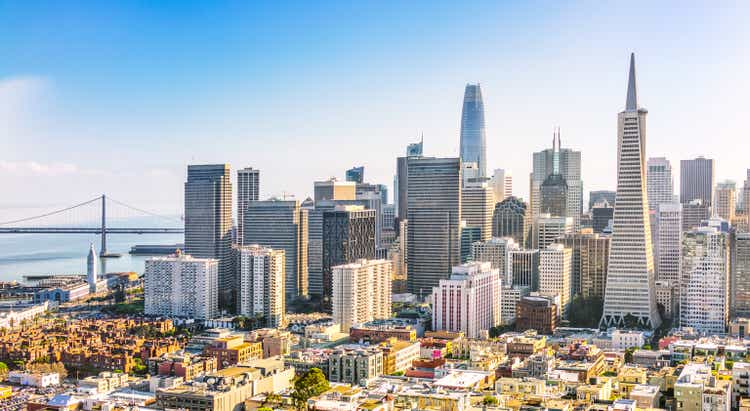 In the world of asset management, portfolio managers are classified by generation alpha, their returns minus the returns of the benchmark index. There are several levers that good portfolio managers can use to try to outperform, the most common being sector selection and individual stock selection. In other words, they try to allocate more assets to the sectors they think will do better and individual stocks within the sectors they think offer superior value/growth.

Like my peers, I also use these levers, but there is another group I like to fish for alpha because it gets overlooked: subsector price manipulation. This article will detail my process for weighting real estate subsectors, but more specifically which subsectors are better at the moment and why.

Top-down analysts assign primarily among the 11 GICS (Global Industry Classification Standard) sectors. In an inflationary environment with a higher than normal probability of a recession, they could overweight energy, utilities and consumer staples. This is what Howard Marks refers to as top-level thinking.

The challenge here is that other portfolio managers are doing it too, so favored sectors could be overvalued. A second-tier thinker, according to Marks, would carefully weigh the sentiment behind market prices against fundamentals.

“Inflation makes energy good, but does it help energy as much as the market thinks it does?”

Second level thinking is the way to go, but at the level of the GICS sector it is really difficult. Not only do you have to know what is fundamentally strong, but you have to be better than the other pros.

You have to be smarter than “smart money” to produce alpha at the GICS level.

Much less attention is paid to sub-sectors. Investors often buy into subsectors by accident, simply as a consequence of their GICS sector selections. One could buy REITs as a sector through an ETF and not realize how much they are buying cell phone towers.

Therefore, I see the subsectors as fertile ground for the alpha generation. By choosing between sub-sectors, you are not competing with professionals, but with random overweights resulting from approximately 50% of investment now being through passive vehicles.

That is a much easier task. I think I can outwit accidental overweight.

So which subsectors are the good ones?

A similar exercise could pay off in any sector, but I’m a financial advisor specializing in REITs, so I’m only aware of sub-sector level price manipulation within real estate.

Earnings season has brought a new batch of data to work with and quite a few sub-sectors are doing fundamentally well, with the following standing out.

First-level thinking would take this information and say:

But that would be to ignore the overvaluation and undervaluation caused by the ebbs and flows of passive investment in these subsectors.

There are dozens of different types of properties within REITs, but most information aggregators like S&P Global will break them down into the following 9 sub-sectors. These are the AFFO multiples at the subsector level. I use AFFO (Adjusted Funds from Operations) because it is the best earnings metric for comparison between sectors.

Rooks are a subcategory within Specialty and have an AFFO multiple of around 19X.

So while the 4 aforementioned sub-sectors (towers, retail, industrials and healthcare) seem fundamentally strong, that strength seems to already be priced into the industrials sector and towers with their well above average AFFO multiples.

Industries and towers have enjoyed rapid growth for quite a few years in a row and have attracted attention or perhaps too much attention.

However, the strength in retail and healthcare seems to be overlooked with AFFOs of 13.4X and 14.1X, respectively. In my opinion, these sectors are mispriced, so I am overweight health care and retail. At a sector level, I believe that the strength of industrial and towers is correctly valued.

The same passive ETF fund flows that cause sectors to be mispriced are resulting in large-cap companies getting the lion’s share of investment dollars.

The table below is organized by market capitalization and there is a clear correlation between size and premium multiple.

Well Tower (RIGHT) does not trade at the premium multiple of 17.8x because it is better, but rather because it is larger. In fact, Welltower has been losing FFO/share and AFFO per share since 2017.

In contrast, Global Medical REIT (GMRE) has been a model of stable growth.

Despite its clearly better fundamental performance, it trades almost at the cheapest multiple (8.2x).

Why? Because it’s the smallest with a market cap of $571 million and ETFs don’t buy small things in any real amount. If you get the chance, listen to the GMRE ones. 3T22 conference call. These guys are creating value with every property they buy.

In absolute terms, the industrials sector is the strongest, but adjusting the valuation, I think retail is better positioned.

I imagine I will get a bit of a push on this statement as retail is in weak sentiment due to just coming out of a difficult period of dual role headwinds, COVID and Amazon (AMZN).

However, the sector has clearly turned a corner and is now heading solidly in the positive direction. For proof, take a look at Kite Realty’s 3Q22 earnings report (GRK).

Kite had cash rent increases of 39.8% on new leases signed in the last 4 quarters.

That’s the kind of pro-owner dynamic that happens when one type of property goes out of supply. New shopping center development has been staple for over a decade and has resulted in insufficient supply, now forcing tenants to pay if they want quality space.

The lease force led to 2 Kite targeting increases, each of which was a pretty large increase.

Simon Property (GSP) confirmed that the force also exists in the mall space, or at least in well-located high-end malls. Like Kite, Simon has raised his guidance twice this year thanks to a strong lease, with new FFO/share guidance at $11.83-$11.88.

That represents a multiple of 9.5x at a well-respected company with a balance sheet that is often cited as an example of a good balance sheet.

I could try to outwit the world and compete in crowded areas, but there are some very smart people who could probably beat me. It seems smarter to find mispricing where it’s easy: the overlooked areas.

KRG and SPG are individually undervalued within the retail REIT subsector, which itself is undervalued. Mispricing mix generates significant outperformance.

GMRE is a top healthcare REIT with top management at the helm, but its price is at the bottom of the list because the institutions have blinders on any company under $1B.