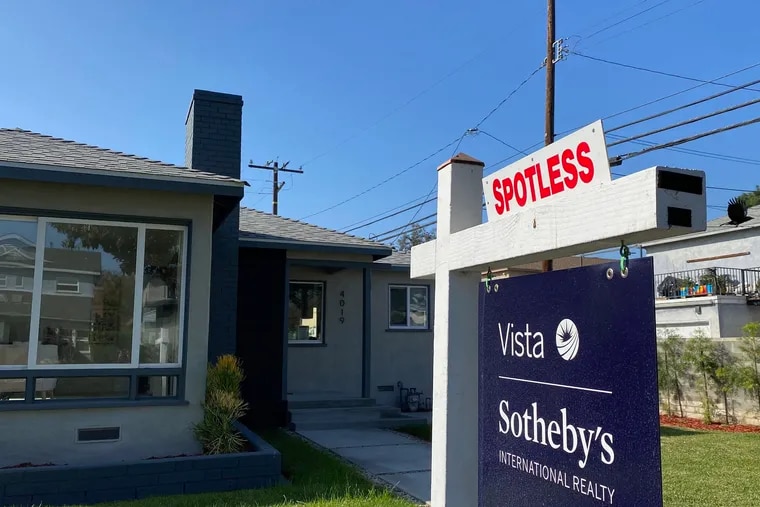 Sorry if this is breaking news, but if you own your home, it probably isn’t worth as much as you think. Home prices are falling as the Federal Reserve brakes hard, raising interest rates to rein in painfully high inflation.

For most homeowners, this isn’t a big financial problem, as long as they don’t plan to sell the house any time soon. But it won’t feel good, particularly combined with the sharp drop in share prices.

This is a dramatic twist. As recently as last summer, housing was booming. Across the country, home prices had soared more than 40% since the pandemic began. Here in the Philadelphia region, prices didn’t go up as much; still, they increased by a substantial amount, about 25%. There are only a few times in history where house prices have gone up this fast so far.

However, the housing market has taken a turn. Prices are falling. And while declines to date remain modest — just a few percentage points in most places, including Philadelphia — they are sure to intensify.

Rising mortgage rates are undermining housing demand and house prices. Driven by the Fed’s aggressive interest rate hikes, the average rate on a 30-year fixed-rate loan is close to 7%, up from 3% a year ago, to its highest level in 20 years.

Those higher mortgage rates combined with so far high home prices, crushing affordability. The typical household that buys the typical home with a typical down payment now has to shell out nearly $2,100 a month in principal and interest payments. A year ago, that same family buying the same house could get a mortgage with payments of $1,100 a month. Most tenants hoping to become homeowners don’t have a sentence. They just don’t have the take-home pay to make those payments.

It also doesn’t make economic sense for most existing homeowners to move to another home. Many homeowners took advantage of lower rates when available and refinanced mortgages with rates around 3.5%. A family would see their rate double if they sold their current home and took out a new mortgage.

Adding to the fall in demand for housing are real estate investors, who have stopped buying. Large institutional investors who were buying tracts of houses to rent know they will get a better deal if they sit tight. And flippers who buy houses with the intention of selling them quickly for easy money. fled from the market.

House prices are coming back down to earth surprisingly fast. It usually takes a while for home sellers to lower sales prices because, psychologically, they don’t want to give up the highest Zillow price they’ve ever seen for their homes. They usually prefer to take a house off the market and wait for conditions to change. Not this time. Some owners are giving in. They understand that potential buyers can’t afford the listed price, and unlike when rates have risen in the past, they know those rates are unlikely to drop any time soon.

Therefore, fasten your seat belt. If mortgage rates stay where they are during this time next year and the economy borders on recession, then national house prices are likely to fall about 10% from peak to trough. Most of the declines will happen sooner rather than later, but prices won’t start rising again until the middle of the decade. And if there is even a modest recession, house prices will fall closer to 20%.

This is consistent, but even if prices fell 20%, it would only retrace half of the price gains from the pandemic era. And during the first half of this decade, they will still have increased by about 4% per year. Not bad, considering that it would be consistent with household income growth.

Worries that house prices will crash as they did in the 2007-2009 financial crisis are overblown. That would happen if there were a lot of foreclosures and distressed sales at substantially reduced prices. But most homebuyers since the crisis passed have high credit scores, and have taken out plain vanilla 30-year fixed-rate loans, not the exploding two-year subprime adjustable-rate mortgages that were ubiquitous in the run-up. to the shock.

We can also take comfort in the fact that home prices in the Philadelphia area should hold up better than most other places. This is because housing is much more affordable here than in other geographic areas, even with the recent rise in prices. Affordability is a big problem here, but it’s even worse in many other parts of the country.

Having said all this, the coming declines in house prices are not going to be pretty, particularly when combined with falling stock prices. We are much less rich than we were a year ago, although we were probably never as rich as we thought.