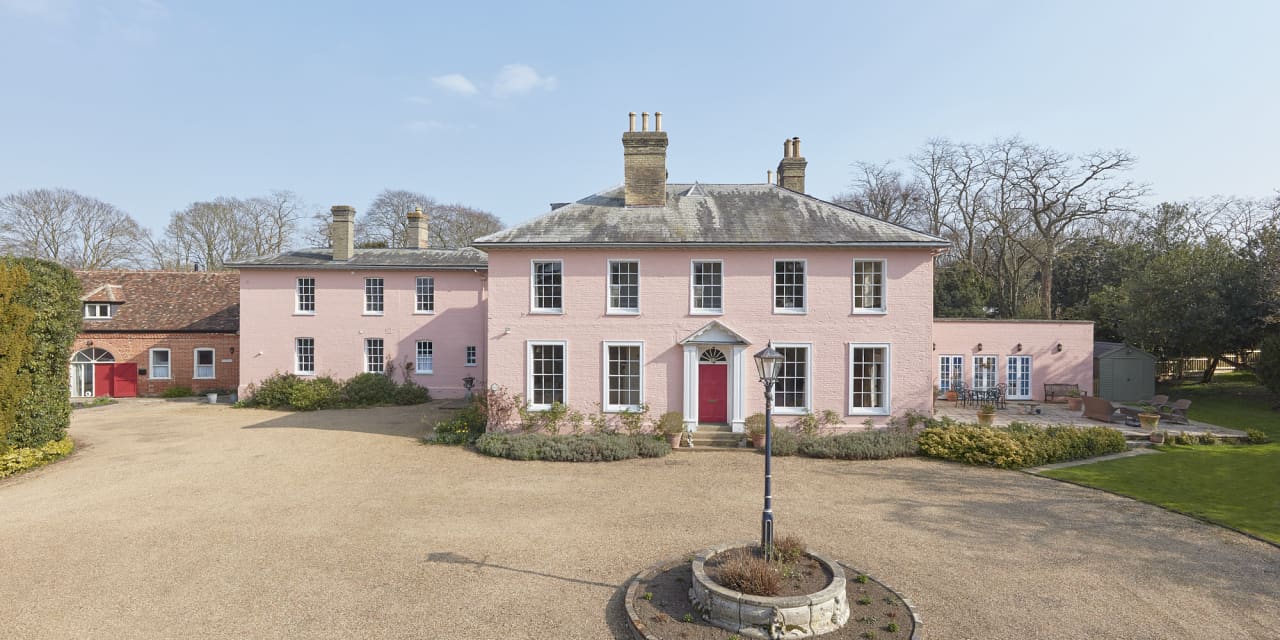 “The current owners have lived at Abington Lodge since 2010 and over the last 12 years have sympathetically restored the house, piece by piece,” said Richard Freshwater, director of the Cheffins listing agency. “They have incorporated a new kitchen, new and redecorated bathrooms.”

Doors from the main house open into a grand entrance hall with a spiral staircase, the newly remodeled kitchen, a large dining room, a family room, and a parlor. This floor also has a utility/laundry room, a pantry and a cellar. The top two floors house eight bedrooms.

Plus: The family behind the UK’s largest pharmacy chain — Boots — lists a £15m Jersey house

“Personally, the grounds are one of my favorite aspects of the house,” said Mr. Freshwater. “Having 19 acres of parkland and paddocks is a rarity in this area, and with the added charm of the River Granta running through the grounds, this is a perfect home for someone looking to be in a highly connected area, close to Cambridge, but with enough space for complete privacy.”

Mr. Freshwater added that the other buildings on the property provide “a fantastic opportunity for anyone looking to make a living from the property. With two separate apartments and also the separate carport, the rental income for Abington Lodge is significant.”

The property has 19 acres of landscaped gardens, which are mainly parkland, plus there are seven garages, as well as the carport and stable, a tool shed and a storage barn.

There is also an indoor pool. “The pool is located in its own building,” Freshwater said. “It has doors and windows on three sides, which can be opened on hot days and open onto a stunning patio overlooking the gardens.”

In the 1660s Thomas Cobb built Abington Lodge, which was later enlarged by the next owner around 1724. It was enlarged again by a banker, John Mortlock, around 1815. Humphry Repton, a great 18th-century English landscape designer, designed its impressive gardens.

Plus: A 100-year-old wedding gift is now a £7m listing in Yorkshire

“Abington Lodge has a fascinating past,” Freshwater said. “Once the hunting lodge of the Earl of Grosvenor in the late 1700s, it is also known to have been visited by William Pitt the Younger. The Mortlock family, who have lived in the lodge since 1815, are an integral part of Cambridge history. They founded the first bank in the city, which they managed for more than 100 years. And I love the story that in 1875, Edmund John Mortlock was confronted by a mob of rioting students. The dispute between ‘city vs. dress’ at the time was quite intense, and I can imagine Mr. Mortlock dismissing college students from the grounds.”

The property is just off the high street opposite the village cricket ground in Great Abington, which is seven miles southeast of Cambridge.

“Great Abington is a popular town that has a church, a pub, a primary school, a post office and a shop,” said Freshwater. “It’s approximately a 15-minute drive from the center of Cambridge, and Whittlesford rail station is a seven-minute drive away and has services to London Liverpool Street. The town has a vibrant community with a cricket team, a town hall with a cafe and plenty of local bands and clubs. It also has bus service to the center of Cambridge.”