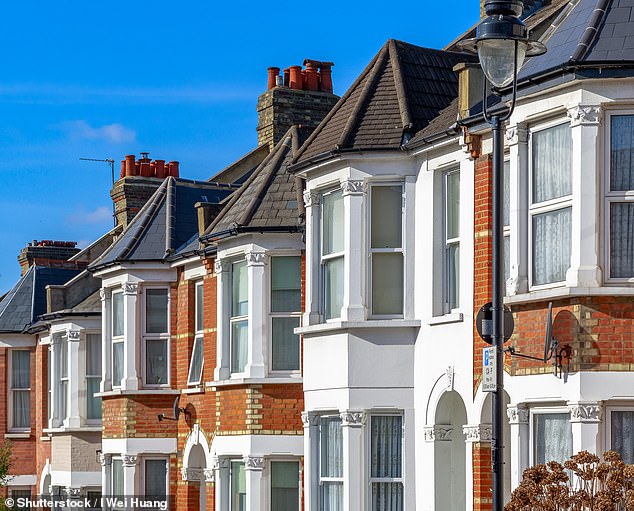 Skyrocketing interest rates could add more than £13bn to household mortgage bills by the end of next year, according to new analysis for The Mail on Sunday.

The staggering extra cost threatens to put another hole in family budgets at a time when many families are struggling due to the cost-of-living crisis.

The Bank of England raised interest rates by 0.5 percentage point to 2.25 percent the day before the Chancellor’s mini-budget, which was delivered nine days ago.

Staggering: skyrocketing interest rates could add more than £13bn to household mortgage bills by the end of next year

Huw Pill, the Bank’s chief economist, warned last week that further significant increases are being prepared in a bid to curb runaway inflation.

Financial markets expect the base rate to rise to as much as 6 percent next year. Many lenders currently charge around 4 percent on two-year fixed agreements.

There is growing concern that a wave of mortgage defaults could hit home prices and leave banks and building societies with rapidly mounting bad debts on their balance sheets.

About 2.1 million fixed-rate mortgage offers are set to expire between now and the end of next year.

Those borrowers will almost certainly face much higher repayments when their existing arrangements end.

Forecasts suggest that a typical homebuyer will have to pay hundreds of pounds more per month. Many families with overburdened finances will run into difficulties and some of them will undoubtedly be forced to default. The impact could amount to £13 billion in additional repayments based on a £150,000 two-year fixed-rate mortgage.

The largest mortgage lenders are Lloyds, which also owns Halifax, along with NatWest, Nationwide, Santander and Barclays.

You can check what fixed-rate mortgage deals you might be offered and how much they might cost based on the size of your mortgage, the value of the home, and how long you want to settle for with our best mortgage rate calculator, powered by L&C.

Andrew Montlake of mortgage broker Coreco warned that rising rates will mean an “increase in potential foreclosures,” which in turn will result in write-offs for banks and building societies. He said it is now “inevitable” for lenders’ bad debts to rise.

Russ Mould, chief investment officer at stockbroker AJ Bell, said banks may have to start putting aside large sums to cover potential losses. He added: ‘It would be detrimental and affect their profits.’

Banking industry body UK Finance estimates the number of fixed-rate deals coming to an end will increase by almost 40 per cent in 2023. The sharp rise follows a surge in the number of borrowers taking advantage of the tax holiday. Rishi Sunak’s doorbell during the pandemic. .

Scott Taylor-Barr, an adviser at Carl Summers Financial Services, said borrowers have been out of breath when faced with rate hikes.

He said he has advised some clients to consider delaying their retirements so they can afford higher mortgage loan payments.

Alice Guy, a personal finance expert at Interactive Investor, described the rate hike as “scary.” She said it could mean monthly payments on a £150,000 mortgage could go up to £500.

The guy who prepared the analysis for the MoS said: “UK households with fixed mortgage deals could pay an extra £13bn each year in mortgage costs if interest rates reach 6 per cent in 2023, as many predict. experts”.

He added that a family with a £200,000 mortgage could be charged an extra £724 each month, which works out to an extra £8,688 per year. Last week was described as the worst for the mortgage market since the 2008 financial crisis. On Tuesday alone, lenders pulled a record 1,000 home loan deals.

> See how much mortgage rate increases have added to costs

In recent times, homeowners have taken on debt at rock-bottom rates. Fixed rate offers were available at 1 percent as recently as last year.

Analysts fear that rising payments could cause home prices to plummet next year.

They believe that houses are currently overvalued by 30 percent.

A former member of the Bank of England’s Monetary Policy Committee, who asked to remain anonymous, told The Mail on Sunday that one of the biggest problems facing the UK is a possible housing crisis.

He said that the jumps in interest rates are going to be much more significant than the stamp duty reduction. “Housing prices are definitely going to stop rising,” she added.

What to do if you need a mortgage

Borrowers who need to find a mortgage because their current fixed-rate agreement is coming to an end, or because they have agreed to purchase a home, have been urged to act but not panic. writes This is Money editor Simon Lambert.

Banks and building societies continue to lend and mortgages are still offered and applications accepted.

However, rates are changing rapidly and there is no guarantee that the offers will last and will not be replaced by mortgages that charge higher rates.

What happens if I need to re-mortgage?

Borrowers should shop around and talk to a mortgage broker and be prepared to take action to lock in a rate.

Anyone with a fixed-rate deal that runs out within the next six to nine months should consider how much it would cost to remortgage now and consider closing a new deal.

Most mortgage offers allow fees to be added to the loan and then only collected when you withdraw. By doing this, borrowers can lock in a rate without paying expensive setup fees.

What if I am buying a house?

Those with agreed-upon home purchases should also aim to lock in rates as soon as possible, so they know exactly what their monthly payments will be.

Homebuyers should beware of overstretching themselves and be prepared for the possibility of house prices falling from their current high levels, due to higher mortgage rates limiting people’s ability to borrow.

How to compare mortgage costs

The best way to compare mortgage costs and find the right deal for you is to talk to a good broker.

This is Money’s mortgage broker partner, L&C, he told me mortgages are still available and you can use our best mortgage rate calculator to show offers that match your home value, mortgage size, term and fixed rate needs.

Keep in mind though that rates can change quickly, so the advice is if you need a mortgage, shop around for rates and then talk to a broker as soon as possible, so they can help you find the right mortgage for you. .

> Check the best fixed-rate mortgages you could apply for

Some links in this article may be affiliate links. If you click on them, we may earn a small commission. That helps us fund This Is Money and keep it free to use. We do not write articles to promote products. We do not allow any business relationship to affect our editorial independence.