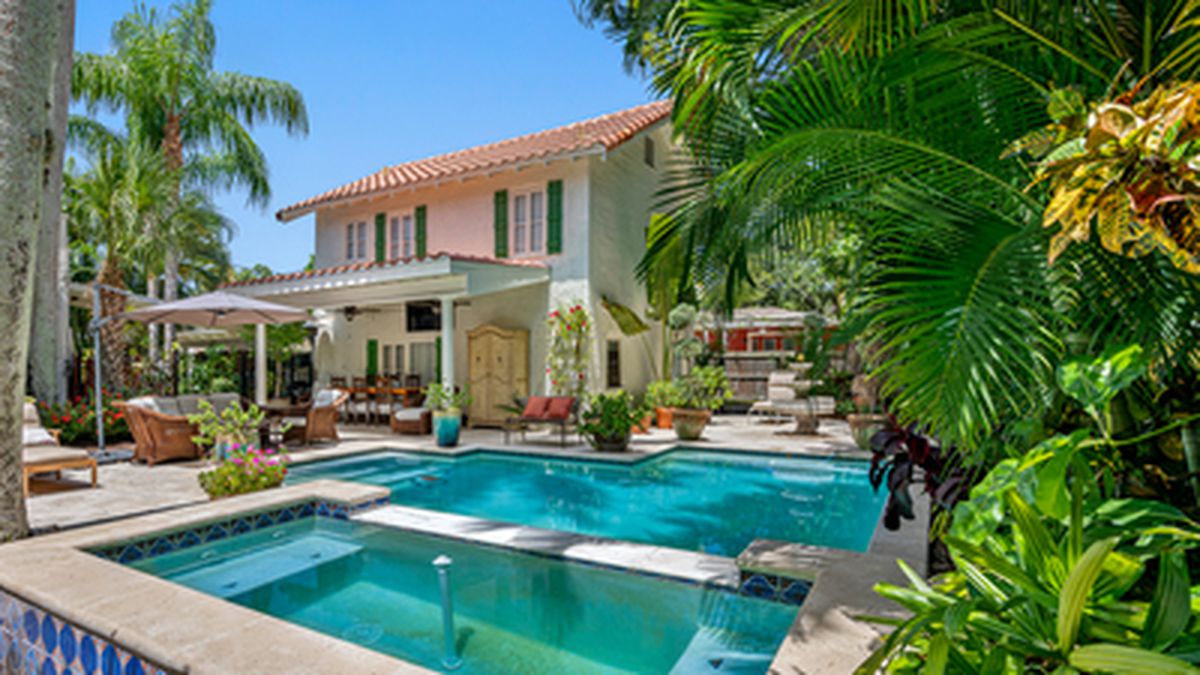 When businessman Samuel Merhige built his home overlooking Boca Ciega Bay, he set trends in more ways than one. He was not only a member of a pioneering St. Petersburg family, but he was one of the first to settle in a sparsely populated area far from the city center.

Now, nearly a century later, homes and businesses are sprawling in almost every direction. Treasure Island, across the bay, is no longer the pristine beach it was in 1925. But the Merhige House still looks as it did then, a classic example of the Italian Renaissance style that was briefly popular during the 1990s housing boom. of 1920 in Florida.

The home, a designated landmark that recently sold for $2 million, “has been updated but they kept it in the original style, which is hard to do,” said Helle Hartley, the listing agent. It still has all the original windows, doors, and flooring except for the kitchen, which was remodeled by the sellers at a cost of about $80,000 but still keeping the style.

The four-bedroom, three-and-a-half-bath house dates back to a time when St. Petersburg was experiencing its first big growth. In the early 1900s, an investment firm purchased 4,000 acres west of the city, including an area called Davista, heralded as “The Jewel of all Florida developments.” The original plan showed residential neighborhoods south of Central Avenue, a park along Boca Ciega Bay, and a waterfront street, first named Beach Drive and later Sunset Drive.

In 1925, Merhige purchased a lot on the nearly empty waterfront street. His father had emigrated from Syria to St. Petersburg, where he had a shop downtown selling imported lace, kimonos, and “silk shawls of all kinds.” After her father’s death, Merhige combined her own import business with her mother’s import business to form a clothing store called Lady Fashion. With the business flourishing, Merhige hired prominent contractor Charles DuBois to build a house that would house not only his wife, their new baby and her mother, but also friends and relatives from Syria.

Eschewing the more common Mediterranean Revival style then in vogue, DuBois designed the two-story house with a barrel-tile roof, widely overhanging eaves, and a recessed arched doorway. Clear glass paneled French doors opened onto two terraces with sunset views. The initial cost was $12,200 and another room was built a year later for $2,000.

In 1929, Merhighe sold the house and moved closer to downtown, where he opened the Orange Blossom Cafe. That year’s stock market crash wrecked the tourist trade and the local economy, and many of the lots in the Davista subdivision remained vacant during the Great Depression. But the area began to flourish again with the 1939 opening of the Treasure Island Causeway. Increased traffic on Central Avenue improved the visibility of Davista and other nearby neighborhoods for tourists, as well as St. Petersburg residents taking day trips to the beach.

The Merhige house changed hands several times: from a couple who owned a shoe-making company in Massachusetts, to a Chicago family who let their friends use it when they wintered elsewhere, and then to a contractor who added a bedroom and carport and remodeled the front porch. . In 1955, she sold the house to a doctor and his wife, who stayed there until the 1970s.

In 1974, the house hosted the Designers Show House, “the first on Florida’s west coast.” In what would become a popular annual fundraiser for the Florida Orchestra, multiple designers each decorated one room: themes that year included “New England Nostalgia” for a bedroom and “Sanctuary for the Mistress of the House.” ” in the kitchen.

“Nestled amid graceful palm trees and surrounded by red hibiscus, this classic home has undergone little change,” the show home brochure read. “Built with terracotta tiles…high ceiling…northern oak floors whose only fault is to get more beautiful with time, the house is spacious, seven rooms on the main floor, with powder room, classic staircase and foyer that drive up. to four bedrooms and two bathrooms.”

In 2008, the Saint Petersburg City Council voted unanimously to designate the Merhige house as a landmark. According to a city staff presentation, the house was historically significant due to its architecture, as evidence of the city’s westward expansion and the contributions of “one of the first ethnically diverse families to make St. Petersburg their home.” .

This fall, the house was featured in an episode of “American Dream TV” as part of a series hosted by real estate agent Hartley, highlighting interesting local spots.

Although close to major routes to the gulf beaches, the house sits on a quiet street with little traffic, perfect for the new owners, an Atlanta family with young children.