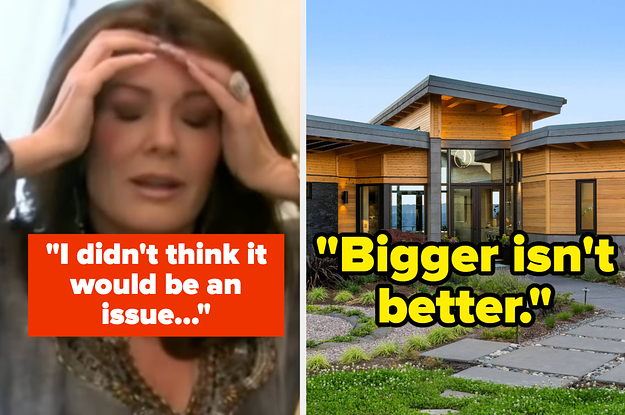 Buying a home is an important and expensive decision, and there are so many factors that can influence it. Unfortunately, it’s too easy to home buyers to make a mistake or end up regretting something about the house they chose.

Recently, we I ask homeowners in the BuzzFeed Community to share their regrets about buying their homes, and their responses mentioned a lot of things I wouldn’t even have thought of. This is what they had to say:

1.“I wish I had put in the effort to find a good realtor instead of assuming it didn’t matter. We lost thousands on a deal that fell through because of an inexperienced realtor. Once we left her and found someone who knew what they were doing, we were in storage at a big house within a week.”

two.“I regret buying the right size house with the right size mortgage for ‘now’ instead of the future. You just get a little tired after a few years and want more space. I’d say if you want two bedrooms, look for properties with three”.

3.“I wish we had saved more money and gotten individual inspections by professionals in addition to the general inspection. Now that I’ve done my research, it really wouldn’t have been much more. Electrician, plumber, fans, etc. My husband and I are handy, but when we moved, a lot of things broke in three months. Bad wiring, water valves older than Moses, etc.”

“At least we would have warned each other and learned what we could and couldn’t fix and deal with it instead of months, a year from now. Pay what you want for an inspector, but you would also get more in-depth information done by individuals in their respective fields”.

Four.“Get all the insurance you can reasonably afford, not just the minimum. I bought an old house in June 2016 and had a devastating fire in December 2020. The rebuilding costs are almost five times what I paid for the house. I had to take a construction loan for the rest, in the end I see it as an investment and I’ll get it back as capital once it’s finished, but what an ordeal this has been!

5.“I dreamed of buying a fixer-upper and transforming it myself, figuring I’d save money and get a lot of satisfaction out of it. We bought an older house that literally just looked a bit dated and would just be a simple case of modernization. It’s never Simple, it’s stressful and expensive.We’ve lived there three years, and still haven’t touched some of the rooms!

6.“Various things. I wish I had known more about how picky the HOA was. I wish I hadn’t bought a house with a west exposure and a bedroom above the garage as it gets incredibly hot in the summer and freezing cold in the winter due to poor insulation. I wish I had bought a ranch style instead of a two-story, since it’s harder for my parents to go up and down the stairs.”

7.“Bigger is not better. We bought a large house (3000+ square feet) thinking our kids would like to spread out and have their own space. Not true. They always stayed close to the main living areas. We didn’t” I don’t need the finished basement, or the flex room, or the fancy neighborhood. I sold that and moved into a small country house (1,500 square feet), and we are happier here. It’s easier to maintain, I’m not spending money on unused space, and I don’t spend all day cleaning.”

8.“I wish I had done more research on the area. I bought a house in a small town that I had never been to before. I fell in love with the house itself, so I didn’t think it would be a problem, but after two years I have realized how isolated and lonely it is.

9.“I got so excited about buying a house that I made an offer for the first decent one in my price range. Everyone told me they would win the offer, but they took it! Now I live almost 30 minutes from the city and all my favorite places. I’m 20 minutes from the nearest decent suburb, so there’s not much to do without driving forever or taking an interstate.”

10“I wish we hadn’t bought a 200 year old house. Nothing fits and everything is crooked. An old property is a money pit. Our next house will be a new build!”

eleven“I bought my house seven and a half years ago. While I don’t hate my house in general, I do hate the parts that are broken. My front room is riddled with leaks and water intrusion that absolutely no one can find. NO ONE! This has been a problem since about five months after I bought the house. I also have to replace the entire floor downstairs due to cracked tiles. I love the location but the house itself has a lot of problems. I’m sorry you keep spending money to solve a problem that no one can find.

“I don’t regret buying the house, but maybe how I did it. I was so excited at the prospect of moving out of my rental property and getting away from my horrible roommate. I may have been a little too hasty. I’m So thankful to have a roof over my head but this still sucks. If I had stayed renting I wouldn’t be responsible for this crap but here we are.”

12“I wish I had paid more attention and not been in such a rush. We had a contract for another house and the sellers backed out. We were moving for the military, trying to buy long distance, and I felt so much pressure to get a house quickly that I passed I missed some big issues that I should have caught when I came to tour it in person. With the next house, I won’t be rushed. Short-term rentals aren’t the end of the world.”

13“Sorry I didn’t use a local lender. I went with a big national bank. They were fine, but Florida has programs for first time homebuyers that they didn’t know about that I could have used to help spend less out of pocket on my down payment.” and had more for closing costs.”

14“We didn’t get an inspection on our house when we bought it a little over a year ago. So far, we’ve paid about $200,000 in repairs. The previous owner told us in person there was nothing wrong (AFTER we closed), and my husband He says he would have bought it anyway, but it’s stressful living in a construction zone with things constantly breaking.”

fifteen.“Looking back now, I wish we had asked the seller the hard questions and not believed everything he told us. In an attempt to find a house quickly, we believed every lie the seller told us. We shared a driveway with neighbors on each side. However, one of the neighbors told us that we could not use that side because it was on his property. The seller led us to believe that they had a fix and that it would not be a problem. They also lied to us about making specific repairs before Let’s get the house. Fake bills and all. The neighborhood is quiet, but I hope the driveway issue doesn’t become a problem in the future.”

sixteen.“I would hire a different inspector. Ours was recommended by our real estate agent. He wasn’t very thorough and missed some pretty big issues.”

17“I wish I had been more picky about where I shopped. It’s really the one thing you can’t change. The lack of availability in my price range finally made me settle.”

18“I regret buying it lol. Home ownership absolutely sucks. Everything about it. Mortgage, P&I, council taxes, HOA fees, water bill, disposal bill, all other bills, repairs, improvements , etc. And oh, did your furnace go out? Throw another $2K and hope your AC unit and other appliances hold up.”

19“I wish I had started saving sooner and put more money in.”

twenty“Because of our status, we both (married) own the house, but the mortgage is in my name only. Big mistake…”

twenty-oneAnd finally, “I wish I’d bought when I was financially ready, not when I was emotionally ready. I was terrified to write that closing cost check and kept thinking home prices would drop again ‘soon.’ how I could, I would be saving hundreds of dollars a month on my mortgage.

Is there something you would add? Tell us everything in the comments.

Note: Answers have been edited for length and/or clarity.