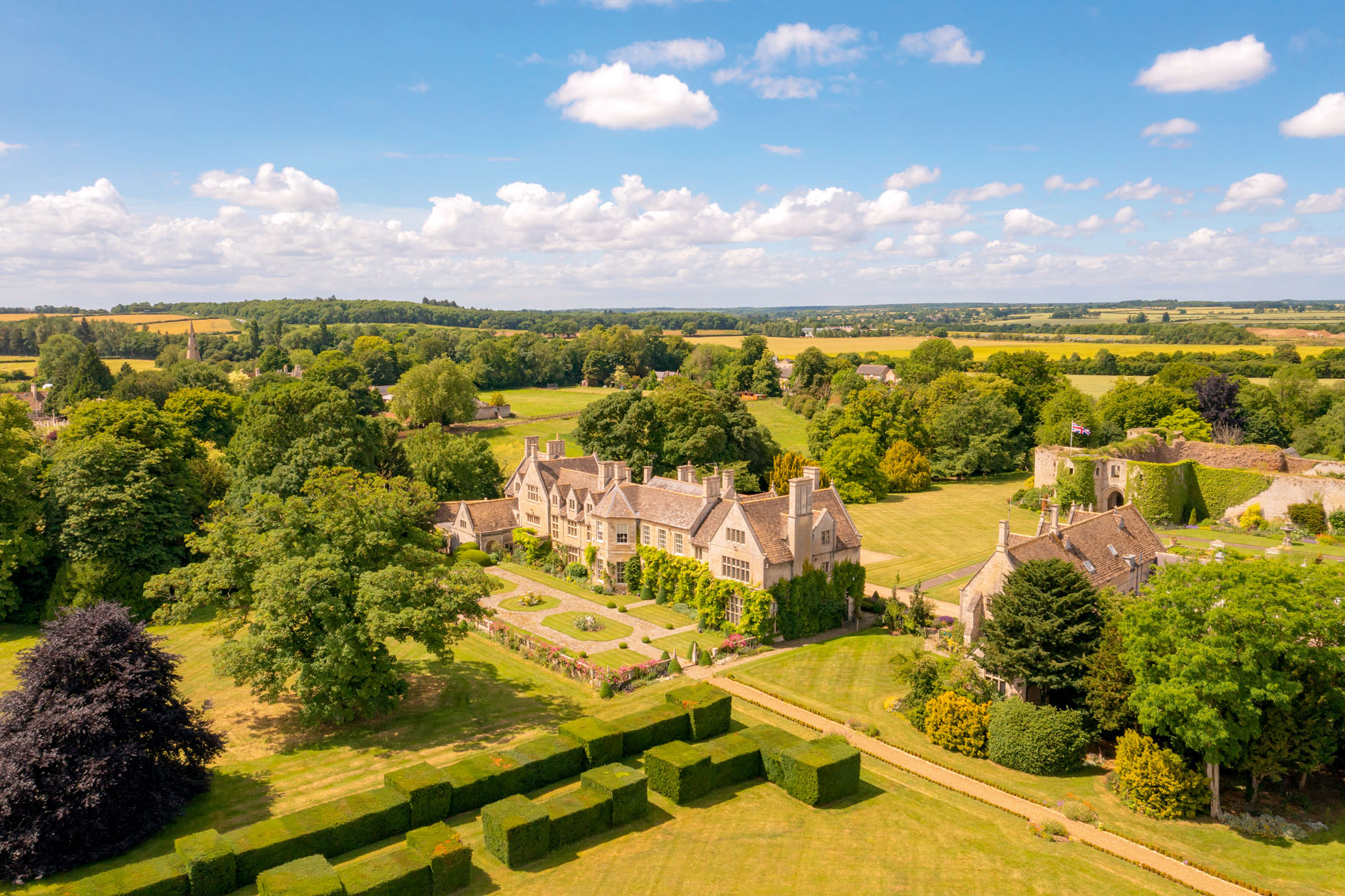 Barnwell Manor, until recently the home of the Duke and Duchess of Gloucester, has an incredible wealth of stories to tell. Penny Churchill takes a look.

Just released on the market is one of Northamptonshire’s iconic country houses, Grade II listed Barnwell Manor, with the ruins of a Grade I listed castle, set in 27 acres of gardens and parkland, half a mile north from the village of Barnwell, which is separated from the market town of Oundle by the River Nene.

Crispin Holborow from Savills seeks ‘offers in excess of £4.75m’ for the main house, plus a Grade II listed stone carriage house, which forms three sides of a courtyard with five stables, hayloft and garages and workshops, with development potential.

And for those who are interested in taking on something even more historic, there is another selling point: within the grounds it is Grade I listed. Barnwell Castle, illicitly built in 1266 by Berenger Le Moyne. When an investigation discovered that Le Moyne had built the castle without permission, he was ordered to hand it over to the Abbots of Ramsey, who held it until dissolution.

The castle is currently on the English Heritage At Risk register and is subject to an ongoing works plan. More details are available with the sales agents. 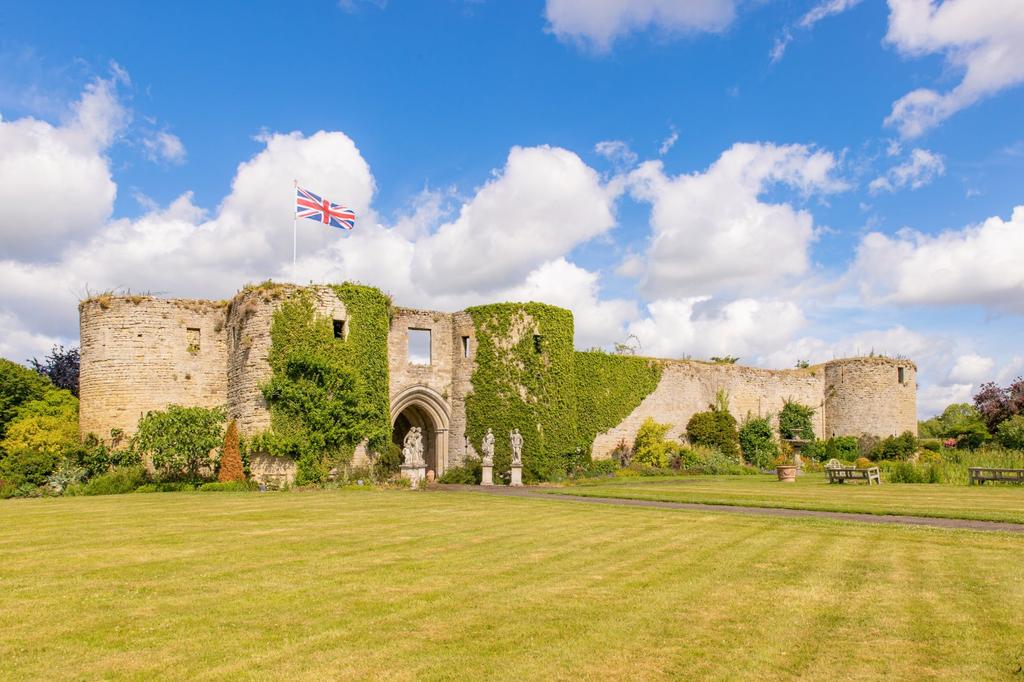 The rambling stone manor house at the heart of the property was built, according to its listing, for the Montagu family in the late 16th or early 17th century and altered or extended in the mid 18th, late 18th/early 19th centuries and end of XIX. /early 20th century, with Sir Albert Richardson’s remodeling in 1938. That work in the 1930s was prompted by the late Duke and Duchess of Gloucester, who commissioned Richardson, President of the Royal Academy and founder of the Georgian Group, to renovate the mansion. 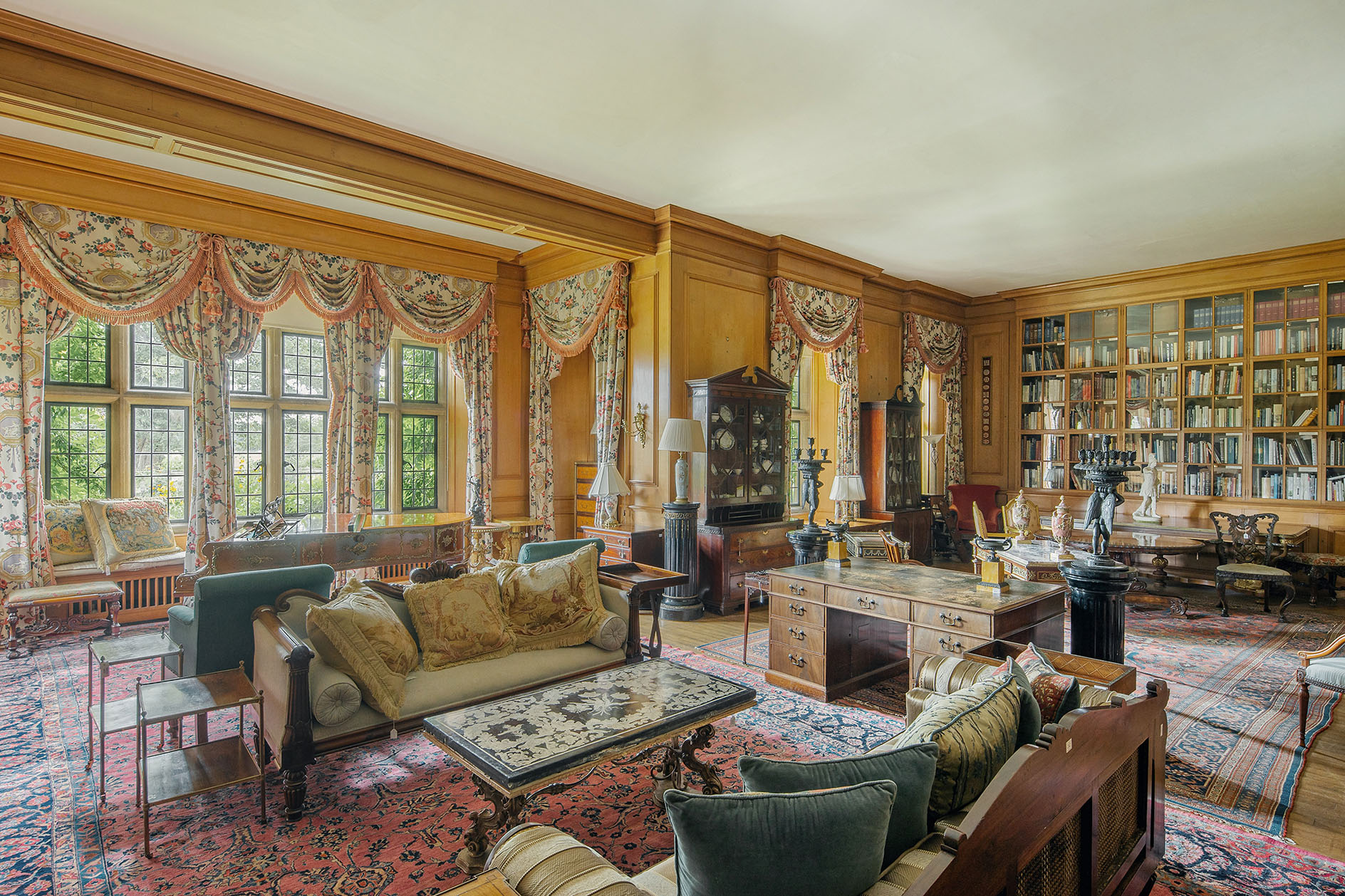 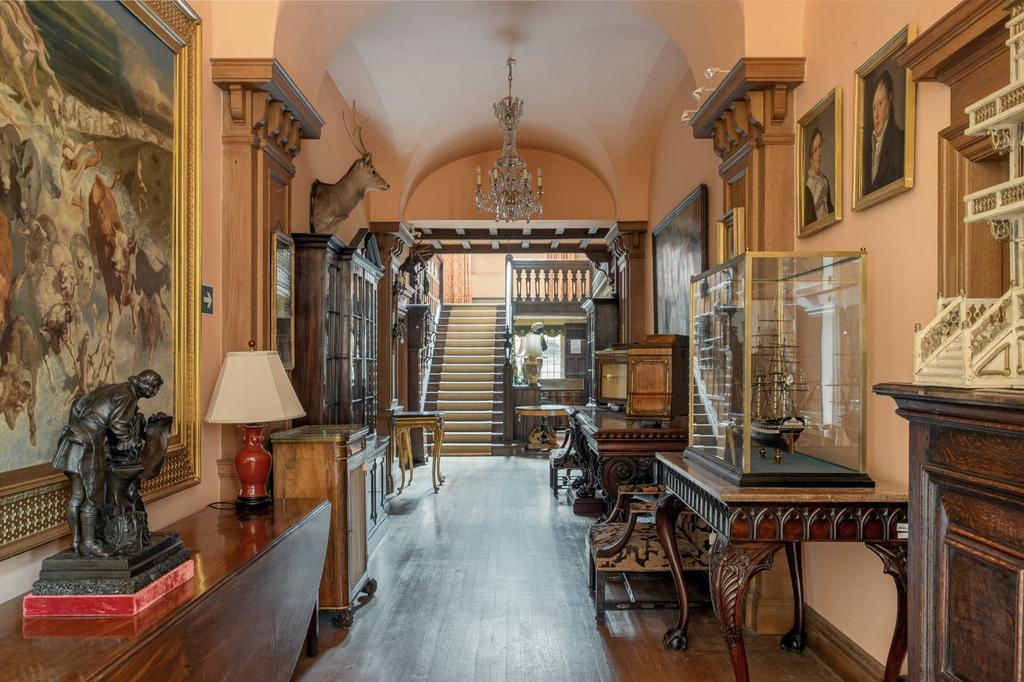 Of particular note are the dining room with its gable of full-width arched windows; the drawing room with its bolection coffered ceilings in the 18th century style; the Richardson-designed 20th-century coffered drawing room; and the dual-aspect library off the main entrance hall with its 17th-century paneling and plaster ceiling adorned with the Montagu family coat of arms. 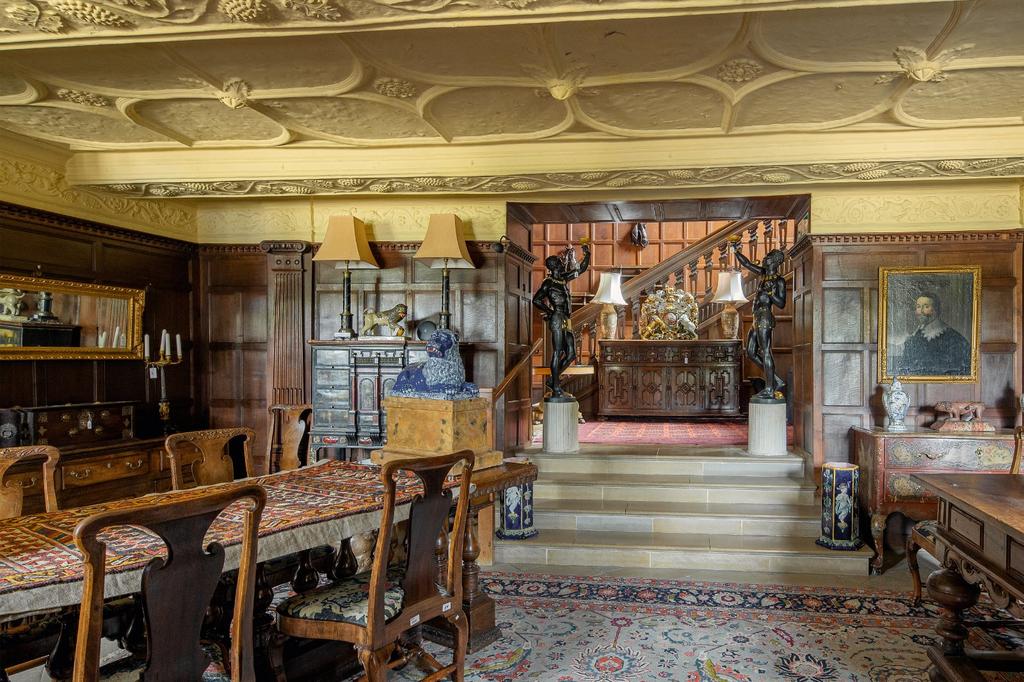 writing in Country life in September 1959, Christopher Hussey traced the manor’s evolution from around 1580, when Sir Edward Montagu built it as a widow’s house, whose father “benefited greatly from the Dissolution and rose to Chief Justice of the King’s Bench in 1539 After some dislike for his support of Lady Jane Grey’s claim to the throne, he retired to Boughton, where he had lodged in considerable style, and where he died in 1557. Barnwell House was enlarged by the first Lord Montagu around 1640. Thereafter Barnwell’s history merged with Boughton’s.

A century later, when the second Duke of Montagu died without male heirs, the estates passed to his daughter, Mary, whose husband took the name Montagu and was made Duke of Montagu. Barnwell Manor was rebuilt around this time. In 1790 Elizabeth Montagu, who married Henry Douglas-Scott, 3rd Duke of Buccleuch, inherited Boughton and Barnwell. 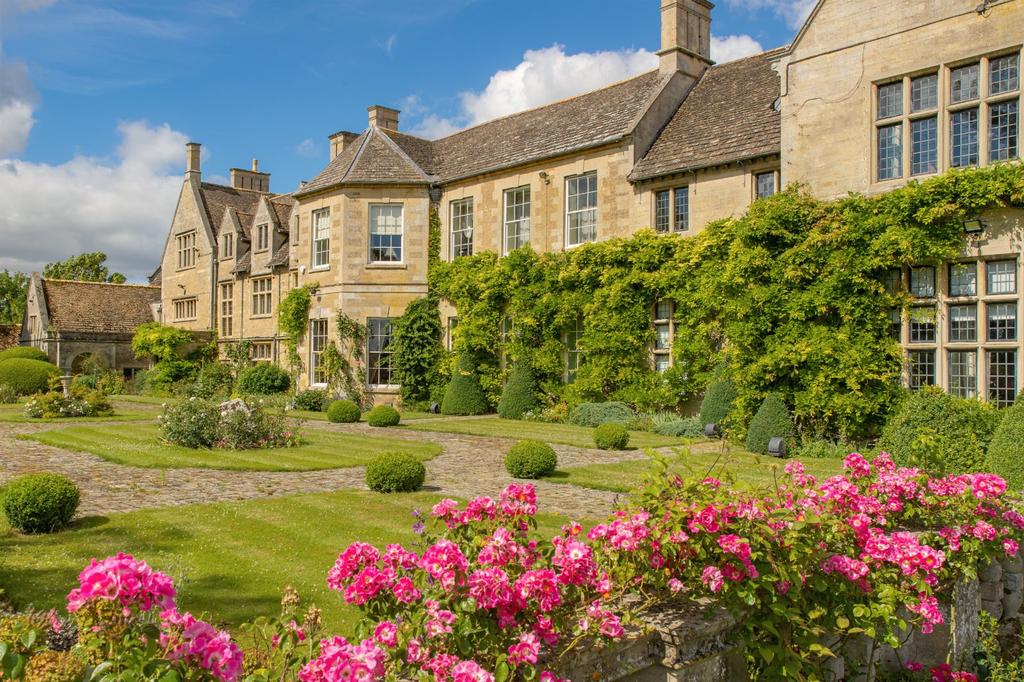 The Barnwell estate was disentailed in the mid-19th century and sold in 1913 to Horace Czarnikow, whose Polish father founded a successful sugar brokerage company and left behind a large fortune. Described as “a very small man”, Horace bought Barnwell for hunting with Pytchley and made extensive repairs and alterations to the house, rebuilding the east front and adding the higher Crusader range on the north end.

He also laid out the garden, which stretches to the east and north with yew hedges and paved paths, with the first, planted in 1921, dividing the lawn into large sheltered enclosures. For Hussey, ‘one of the most effective introductions was the wide balustraded terrace along the east front, with steps down to the lawn aligned in the Georgian arch, which succeeds in giving a certain unity to its varied architecture’. 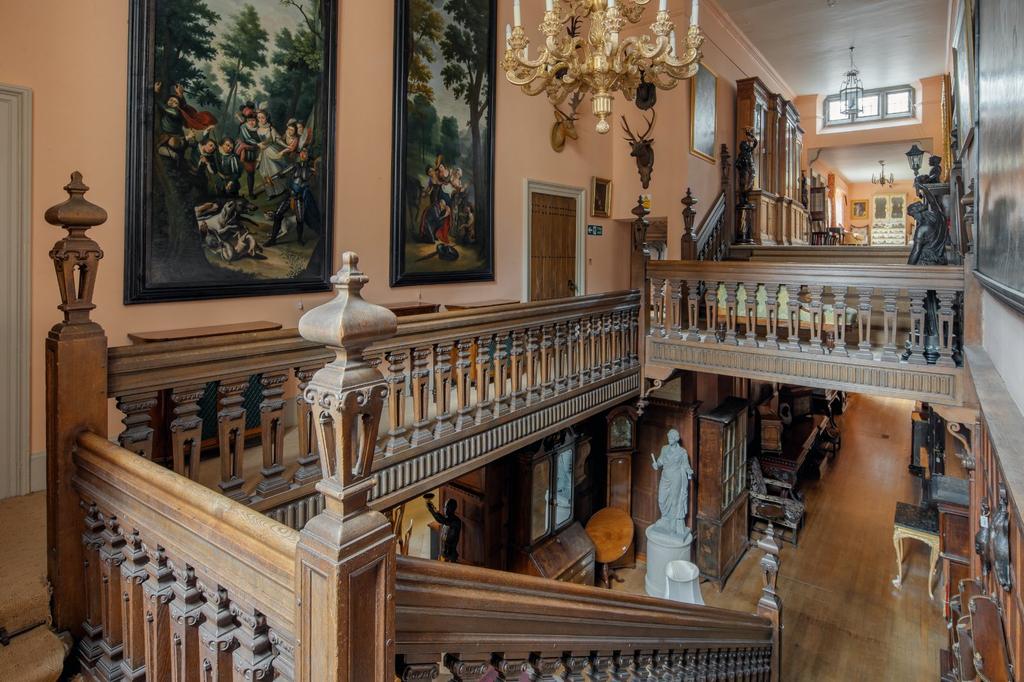 Recommended videos for you

When, in 1938, the late Duke of Gloucester purchased the Barnwell Castle estate, his wife, Princess Alice, was happy to return to one of the first houses of her Montagu ancestors, which her grandfather, the 6th Duke of Buccleuch, had sold to Horace Czarnikow 25 years earlier. 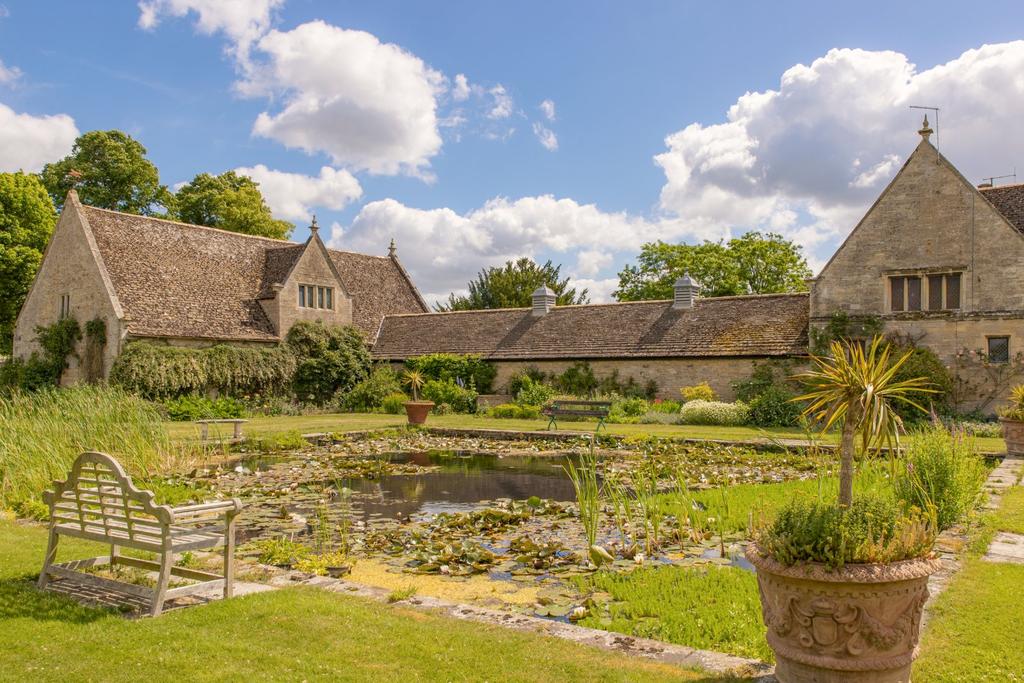 Barnwell Manor was home to the late Duke and Duchess until 1995 when the family moved into Kensington Palace, since then the mansion has been rented out and used as an antiques showroom.

Barnwell Manor is for sale for £4.75m; see more photos and details.